Memphis Redbirds are a triple A  Affiliate of the St. Louis Cardinal

This game was also one of the games that Jason Giambi did his rehab assignment in the Springs. He has been on the disabled list with a strained left quadricep muscle.

He came out early being one of the first players to get on the field he immediately started signing autographs.

Here he is signing autos. He signed from about 20 minutes before the game til almost first pitch.

Another photo as he continued to sign for the Colorado Spring fans. He signed a card a Rockies magazine and 2 mini Helmets for me.

He was not in the starting line up in this nights game. He was used as a pinch hitter in the game.

Clayton Mortensen throws the first pitch to the Redbirds Adron ChambersWho would strike out for the first out of the inning. Mortensen would allow 2 walks, a single and 1 strike out to the next 4 batters. Andrew Brown was the 6 batter to step to the plate in the first and hit a grand slam HR. (4-0) Redbirds.

Browns Redbirds teammates greet him with high fives as he crosses home plate.

The next batter would fly out to end the inning.

The Sky Sox would not produce a run till the 4th by that time the were already down 7-1.

Mortensen would be taken out in the 5th. Blake Johnson would be brought into the game. (Not to be confused with Alan Johnson or Andrew Johnston)

Stu Coles hands the ball to Blake Johnson in the 5th Inning.

In the bottom of the 5th inning the unfamiliar # 51 came out of the dugout to bat in the pitchers spot. Well unfamiliar as # 51 and in a Sky Sox uniform.

Jason Giambi #51 batting in the 5th inning for the Sky Sox.

Alan Johnson would then pitch in the 6th inning for the Sky Sox. 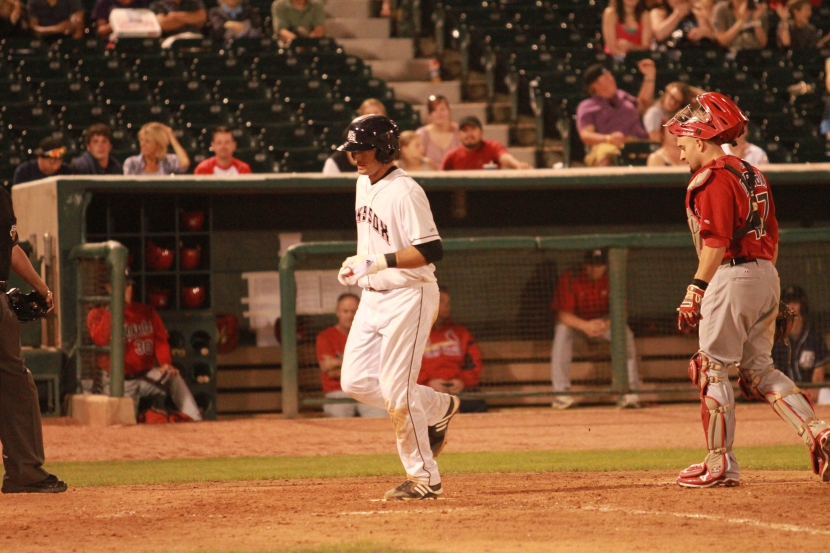 Oh and Giambi’s at bat in the 5th he struck out!

The Rockies return to Coors Monday @ Coors against the Marlins see ya then.