Today was one of those days  that I did really want to go to a game. I questioned myself even in the car on the way down to Coors so I first headed to the box office to get tix for a few games I needed tickets for in the next few weeks. Still not getting a ticket for tonight’s game. After heading to the Rockpile line that I was third on they just had us wait at the windows. So got my ticket and headed to the early gate. Saw that the screens for BP where up but the Rockies were not hitting. I guess after their great road trip they did not need it!!!! (Sarcasm) So I was up in the pavilions and Dan handed me a extra ticket he had which lets me get into the first row. Thanks Dan. The Marlins BP was kinda lackluster except for a few concourse shots by  Marlins Catcher John Buck and a few others by a couple of Marlins. So ended up getting shut out and once again asked why did I head out to the game. So as always I headed over to the first baseline. No Rockies signed not to surprised at that one since they haven’t too much this year.

Kevin Millwood headed to the bullpen and the crowd did not even notice which is not uncommon with new acquisitions. This is his 2nd start for the Rox and his first at Coors.

The Rockies Starting line up during the National Anthem minus 1st baseman Jason Giambi and Millwood and Catcher Eliezer Alfonso.

Millwood and Alfonso Heading to the field for the start of the game. 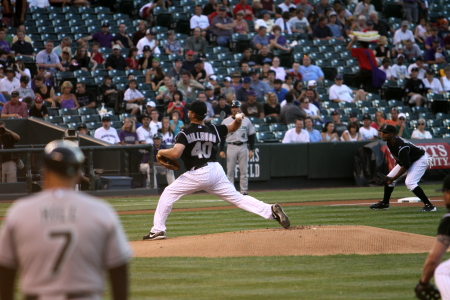 Kevin Millwood pitches to the Marlins Emilio Bonifacio. Bonifacio would strike out for the first out of the game. In the inning Bryan Petersen would then hit a triple and Mike Stanton would score Petersen and himself with a 2 run HR for the Marlins first 2 runs of the game. (2-0) Marlins

Former Rockie and Sky Sox Alfredo “fettucine” Amezaga is once again a Marlin.

The Rockies would go down in order in the 1st. inning. Eric Young Jr. grounded out to the pitcher and both Dexter Fowler and Carlos Gonzalez would strike out.

The Marlins would send 3 batters to the plate in the 2nd Dewayne Wise was the only one to reach base and was caught stealing second base. 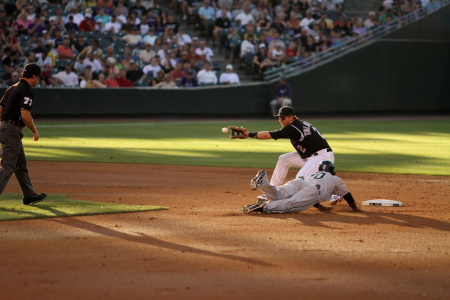 The Deuce Troy Tulowitzki catches the throw from Eliezer Alfonso to get Wise out in the 2nd.

The Rox would respond in the second with a run. The Deuce lead off the inning with a single and would score on a Giambi single.

The Rockies would come up in the third and Eric Young Jr. would bunt to lead the inning off and also stole 2nd base. Fowler than flew out to centerfield. Cargo would than also hit a very long fly ball to center that looked like it was heading for the visiting bullpen but was also caught at the wall by Marlins center fielder Dewayne Wise.

This is Cargo running to first as he realizes it was being caught. I think he thought it was gone also.

The Deuce would than hit an HR to score himself and Eric Young Jr. the Rockies would than take the lead (3-2)

The Deuce steps on homeplate after his HR in the 3rd.

The Marlins would re take the lead in the 4th. Their catcher John Buck would hit a 2 run HR after a Gabby Sanchez double. (4-3) Marlins.

This was a weird play in the 4th Alfonso tipped the ball and it looked like the ump called it foul then fair and Alfonso was tagged out by the Marlins catcher John Buck. After watching a relay the ball did touch the foul line but never go over it. In this inning Chris Nelson would hit a double, but be stranded on base.

Marlins pitcher Hensley would come out of the game in the 6th. He would allow 10 hits, 1 HR strike out 4 and 3 runs. Dunn would come into finish the inning. Striking out Seth Smith.

Millwood finished the 6th inning and Rex Brothers came in to pitch in the 7th. Millwood left the game with 3 strike outs, alowwing 7 hits including Stanton and Bucks HR’s. 4 runs and walked one.

Jason Giambi catches Chris Nelson throw for the second out of the 7th inning. 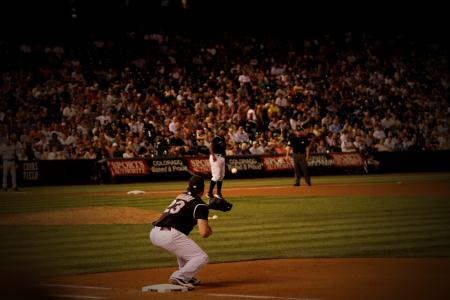 For the third out of the 7th inning The Deuce throws one of his off balanced throws to Giambi at first. 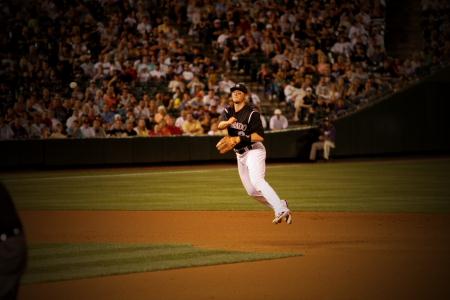 The Rockies went down in order in the 7th.  and so did the Marlins in the eighth.

The deuce lead off the 8th. with a walk and would than steal second.

The Rockies did not score in the inning even with the 2 walks allowed by Marlins pitchers, Badenhop also walked Chris Nelson.

The Marlins faced Matt Belise in the 8th. Belise struck out Peterson, Stanton and Dobbs both grounded out.

The Rockies came up in the 9th. one run down and Mark Ellis would pinch hit in the pitchers spot to lead off, he than flew out to right. Eric Young Jr. grounded out to second and showed much frustration as it was a close play at first. Dexter Fowler than came up and hit a single into center which he than tried to stretch into a double, he get caught in a run down between first and second, do to a bad throw to first the ball was never thrown back to second and he was safe. 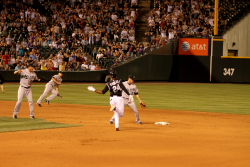 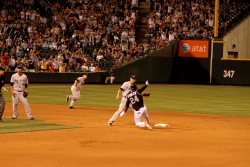 here’s a sequence of him reaching second.

The Deuce was than intentional walked. Than almost seven hours after arriving at Coors I would find out why I came to this game. Jason Giambi stepped to the plate with 2 out 2 on. he would hit a shot over the auxiliary score board for the first walk off HR of the year for the Rockies. Proving that Blake Street magic still existed and why you never leave a baseball game early.

I believe they had  4 at this point last year including an Iannetta against the Mets in April,Giambi’s and Seth Smith  against the Red Sox and  Carlos Gonzalez’s on July 31 for the Cycle. 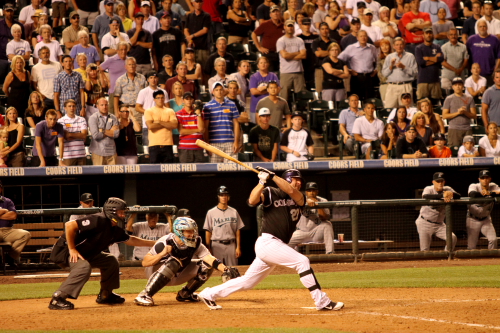 This is the actual swing for the HR it was just before the crowd reliezed it was an HR just look at the crowds eye as the watch the ball hit to right field.

Jason Giambi being greeted at home plate by his teammates for their first walk off of the year. 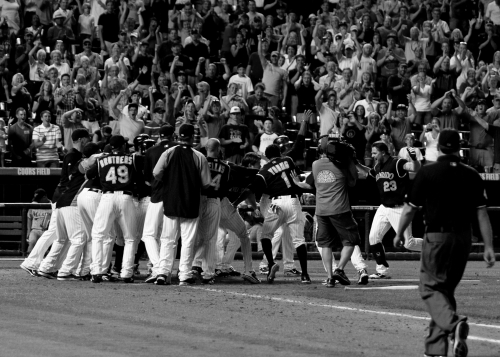 Thats it for this one. It was agreat night to be at Coors. I will be at Coors for the entire Marlins series before taking a few days off from baseball as the Rockies play the Dodgers. See ya at Coors.