Immediate after the game at Tempe Diablo we headed to Salt River Fields. It was about a 45 minute drive in rush hour traffic.

We got into the stadium about an hour before the game. Headed right down to the 1st base line to get a few autos did get a few, but don’t remember exactly who I got this day.

Jaime Moyer heading into the dugout for his start.

Pagan would fly out to center and Moyer would sit the Giants down in order.

Todd Helto in the on deck circle in the first.

Marco Scutaro lead off the inning with a walk. He would advance to 3rd on a Fowler single. Fowler than advanced to second on a passed ball.

…and caught by Eli Whiteside for the second out.

Helton than grounded out to short to end the inning. I think the key to Rockies success will be run production especially in scenarios like this.

to very fast runners on base and they could not produce a sac fly by either of the 3 batters would of scored one possible 2 runs.

This was suppose to be the creative BNW but did not like what it looked like. So here it is in color. Catches gear on the bullpen grass.

Jaime Moyer came to the mound in the 2nd and started out striking out Aubrey Huff. 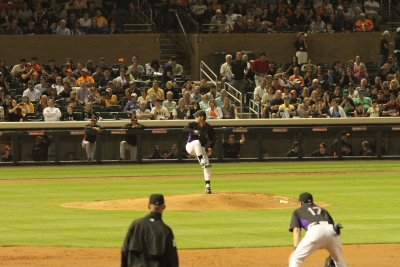 Moyer pitching in the 2nd. Nate Schierholtz and Joaquin Arias would also get out that was 6 batters in a row. 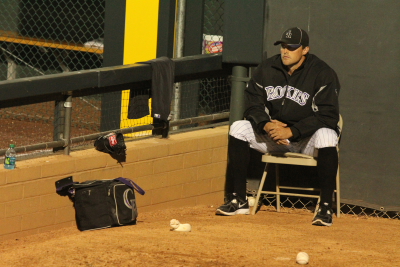 The Rockies Scored 2 in the 2nd Michael Cuddyer started the inning off with a single. Casey Blake and Willin Rosario also followed with singles.

Cuddyer gets out Moyer hit to third in the 2nd.

Moyer continueing to pitch in the 3rd inning.

He would sit the Giants down in order once again that is three perfect innings.

Another pitch in the 3rd. If you notice I am moving further away from the infield I was heading out to the berm to just hang out did not take photo’s for a few innings.

Moyer pitch 4 perfect innings and Matt Reynolds kept the perfect streak in the 5th. Pitching to 3 giants who did not get on base.

The perfect game contiunued to the 6th when with 2 out Pablo “Kung-fu Panda” Sandoval got to 2nd base. 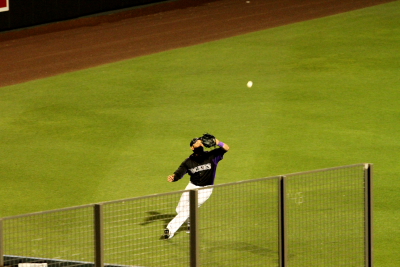 Andrew Brown making the last out in the 8th. 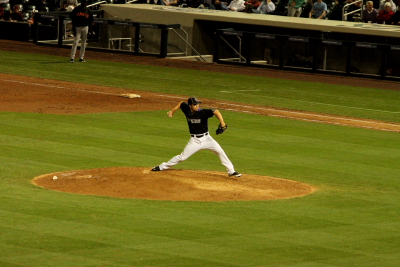 Rockies pitcher ??? Putnam #54 pitching in the 9th. Could not find him on a roster list!

Putnam throws to Brandon Wood at first for the final out of the game.

The Rockies Won 7-0 over the Giants. Moyer pitched awsome. Beside the bad run production in the 1st the Rockies really put together other very good innings.

This game brought the second wave of Rantic since we were there to Salt River Fields.

Geoff came down with a group of friends.

The Next picture is the Ned group.

I have been home for about 36 hours as I am writing this.