Mets Vs. Rockies game 2 in series my 9th game of the year at Coors.

This game once again had a terrible batting practice only 2 or 3 were hit to the pavilions. So I headed over to the 1st base line to see who would sign once again Todd Helton and Michael Cuddyer signed.

A few Rockies starters during the National Anthem.

Dex talking to Brian Jordan probably about how he hit the home run last night and how he has plans to hit another tonight! 😉 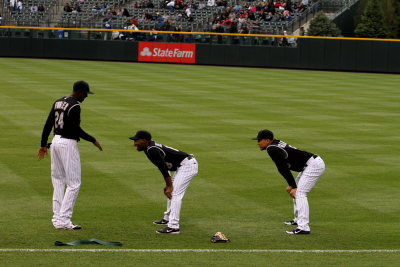 Now he is telling Jonny Herrera and Cargo how even though he is faster than them he doesn’t have EYJ speed!! OK maybe that is not the conversation but writing almost 80 post a year and on my 10th or so this season I have to livin things up.

Guillermo Moscoso was the starting pitcher for the Rockies it is his first start for the Rockies he was called up from  Colorado Springs because of an injury to Jeremy Guthrie. interesting enough his injury was due to a bicycle fall riding to Coors on Friday. He was placed on the 15 day disabled list. No report on the condition of the bike!

Moscoso throwing the first pitch to the Mets Kirk Niewenhuis. I also found out that Niewenhuis is from Denver and was a Rockies fan growing up. Niewenhuis grounded out to third and The nest 2 batters flew out to Michael Cuddyer in right. 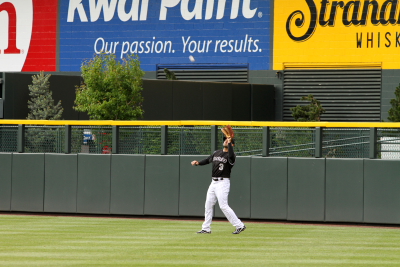 Michael Cuddyer making one of the 2 catches for outs in the 1st.

The Rockies first Marco Scuturo started the inning with a  single ended up on third because of the second baseman missed the ball. Jonny Herrera struck out Carlos Gonzalez walked but was out at second on a Troy Tulowitzki single. Scutaro scored on the single (1-0) Rox 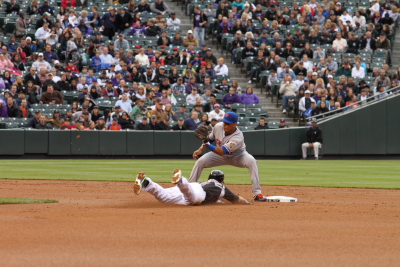 Cargo made getting out at second look like so much fun Tulo had to try it too he got caught stealing.

After David Wright started the Mets 2nd with a single Lucas Duda hit an HR (2-1)Mets.

The Rockies did not benefit from a Todd Helton lead off walk in the 2nd.  Cuddyer and Wilin Rosario bot struck out. Dexter Fowler flew out to his center field counterpart Kirk Niewenhuis.

The Mets scored an additional run in the 3rd. Rockies went down in order. (3-1) Mets

Cargo would start the 4th. with a single, Tulo would also hit a single. Helton would hit his 56oth double of his career. To tie the game at 3 Cuddyer hit a single scoring Tulo (4-3) 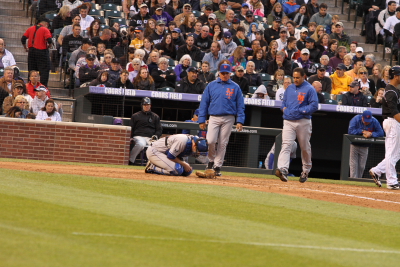 Their was two other hits in the inning basically a pitch hit Josh Thole and he hit the ground.

Moscoso pitching in the 5th inning.

Scott Hairston swinging for a strike in the 5th. The Mets did score 3 more runs in the 5th. (6-4) Mets

Rosario dives for a bunt that bounced foul after he missed it. 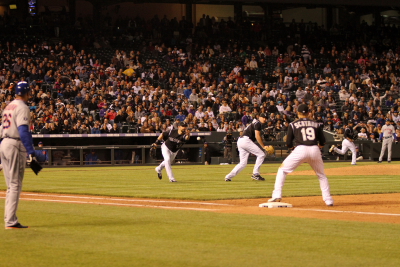 Helton fields the next bunt and shuffles it to Scutaro covering 1st.

Still Creepy!! This game they actually came up the aisle of the section I was in.

Tulo Grounding out in the 8th.

The next photo is something I would normally post 1-its is very blurry. 2 it is a Rockie missing a ball. I did find it interesting because the line from the glove is actually the ball.

Told You!!! This is Cuddyer missing one in right hit by pinch hitter Mike Baxter. This was a lead off hit. Baxter did score on a wild pitch after advancing on ground outs. (7-4)

Tulo throwing to first to end the Mets 9th.

After Cuddyer struck out and Rosario grounded out Fowler stepped to the plate and hit a solo HR to keep the Rox in the fight. 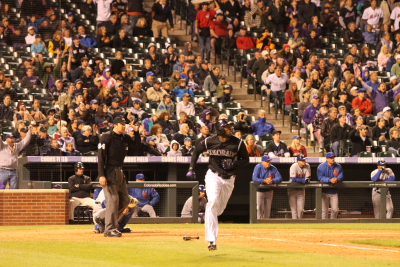 Dex watching the ball head over the fence for his 4th Hr of the year and 19th in his career. After his HR things looked promising.

..that was missed by Niewenhuis who dove  and missed the ball. 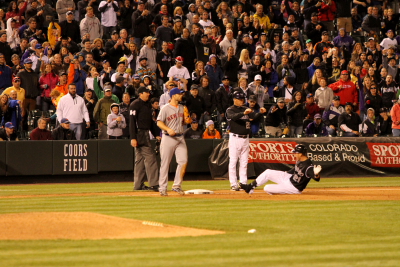 The Giambino stepped to the plate to pinch hit for Scutaro. 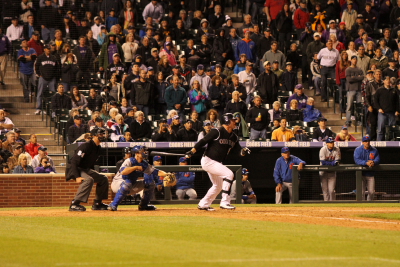 The series is now tied at 1 a piece. The rubber match was played Sunday more to come!

Well That is it for this one.

One moe with the Mets from Coors before the Dodgers come to town for 3 games Monday – Wednesday.

well see ya there.

Also remember to check out the roxwalkoff.com for more Rox addict photo’s