My 30th game of the year at Coors.

Yesterday I missed my 3rd of the season. Slacking OK had to work!

Once again it was a Sunday and it started off with getting to the stadium early to get inline. Today the players that signed were Jhoulys Chacin, Ramon Hernandez, Wil Nieves and Guillermo Moscoso. I got Jhoulys to sign a game worn jersey card and Wil Nieves on my 11×14 that I am getting the team on. I did get on Ramon Hernandez’s line but the session ended before I got to him. It was all good I already have him on my team photo and only have a card for him. I asked Jhoulys how his rehab is going and he said very well. Wil Nieves was talking about how hot it was on Saturday with all the gear on he is a real cool guy and talks to everyone he signs for which is really cool of him.

Here is a look from the top of Wil Nieves line. The line to the left was Hernandez’s and Jhoulys’ was on the far left.

Christian Friedrich was the starting pitcher for the Rockies. He was 4-1 entering the game and has been pitching well on the road. But seems to be having trouble at home. The first 4 batters got on base, including a Mark Trumbo HR. They scored 4 in the inning.

Bob Apodaca came out to the mound after Pujols hit his single in the inning.

Michael Cuddyer running to first in the 1st inning. Cargo scored from 2nd. this would be a double for Cuddyer.

Tori Hunter would go long in the 2nd for the Angels. Stretching the Angels lead 6-1. 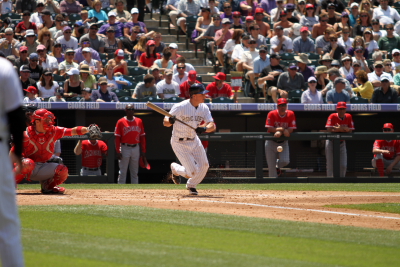 Jordan Pacheco bunting to lead off the 2nd.

Tyler Colvin goes long as he watches the ball go to center field it looked like Mike Trout may have caught it at the wall but it did go over for 3 runs. (6-4) Angels. 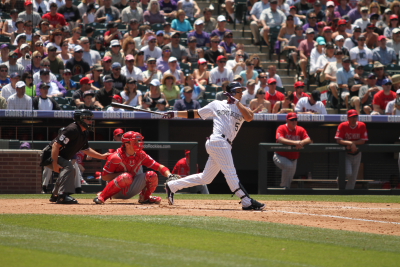 Look who else went long in the inning for a 2 run HR to tie the game. way to go Cargo. Great to see him getting the bat going the last two weeks or so. Now if we can hold the runs down we can get something going. Albert Pujols on gets on base in the 4th on a Pacheco error. The Angels did score 2 runs in the 4th. (9-6) Angels

Eric Young Jr. pinch hit in the 4th and hit a single and scored on a Colvin single. (9-7) Angels

Mike Trout dives back to first in the 5th.

After walking in the 6th Mark Trumbo gets caught in a rundown. 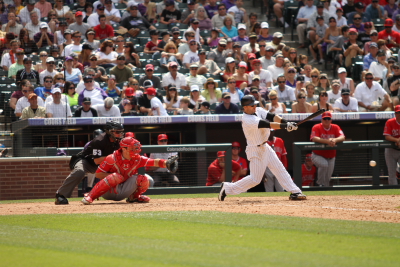 Marco Scutaro hits in the 6th and grounds out to end the inning.

Carlos Gonzalez puts down a bunt to get on base in the 7th.

Diving back to first.

Stealing 2nd. He would be stranded on base in the inning.

Albert Pujols takes a swing in the 8th for a lead off double.

Here he is cruising into second as Marco Scutaro grabs the overthrown ball.

After the 8th I headed behind Home plate.

Here is Tori Hunter getting a strike call in the 9th. this was strike 2 he would strike out. Rafael Betancourt pitched the 9th for the Rockies Putting the Angels down in order for only the second inning of the game Rex Brothers also did it in the 7th.

The Rockies came up the inning trying to steal the game from the Angels. Tyler Colvin made is presence known once again by leading off the 9th with a double. He went 3 for 4 and walked in the game. Scoring twice with 3 RBI’s pretty good game and this was to follow-up yesterday which he hit 2 HRs. He did score in the inning on a Scutaro single. Cargo would come up with Scutaro on first and no outs. 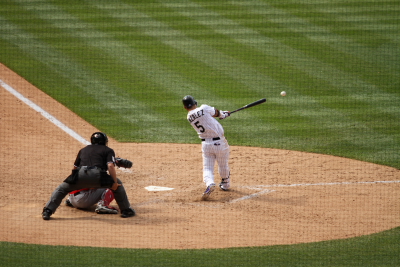 Cargo would hit a hard-line drive back to the pitcher who caught the ball then dropped it trying to throw to first then throw to second and the 2nd baseman threw back to first since I took the above photo I missed the play. 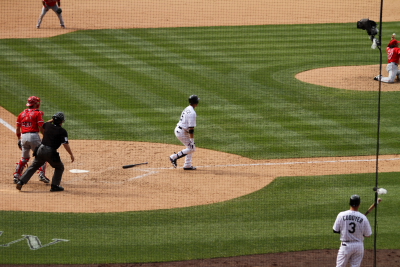 You can see the pitcher throwing to first in the background. Somewhere in there the Ump called it safe and Cargo paused Scutaro ran to second. Somehow they were both out. I have not seen a replay to really know what happened or what the confusion was on the play.

Jim Tracy came out of the dugout.

After arguing with the home-plate umpire Greg Gibson….

He was tossed from the game.

The Rockies would get another runner on base when Cuddy hit a single, Helton would pop up to shallow left and the game and series was over. It was the Rockies fifth lose in a row and were swept at home by the Angels. The Final score was 10-8. This is the only team that scores so many runs and still looses games something needs to be done with pitching. The return of Jeff Francis yesterday did not pan out to well. Friedrich has been killing on th road and getting in trouble at home and everybody else has been very inconsistent.

Well that is it for this one three left at home before they head out on the road for 3 in Detroit, 3 in Philly and 3 in Texas which I will be at 2. The Road trip schedule will be posted in the near future, it is an interesting schedule that i get to go to 4 states I have never been to. Possibly 3 MLB stadiums and countless minor league parks! If the Rockies season is getting boring the road trip should add some exciting baseball games.

Well see you at Coors for the A’s series when we get to see the return of Seth Smith to Coors.