My 57th game at Coors this year.

Today the Rockies did their Celabration of Colorado Olympians and Paralympians. There was batting practice besides almost getting the first ball hit out by the Rockies Andrew Brown, I did not even come close to anything.

Before batting practice was over I headed behind the Diamondbacks dugout to see if I could get cards signed by a few of their coaches and manager Kirk Gibson since he would not sign outside the stadium the night before and he said I only sign inside. Which he did not!

So I than headed over to the Rockies dugout where the Olympic athletes started gathering. Amy and Kevin were trying to get Missy Franklin’s autograph on some very cool photos from the Olympics.

Here are some of the Colorado athletes. I forgot who many of them were. The tall guy was a track and field competitor.

I do know and most people reading this, knows who one person in this photo is. If not I will show you who in the next few photos.

Here she is practicing her first pitch. 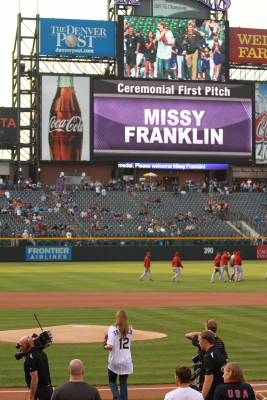 Heading to the field in here very own Rockies Jersey. 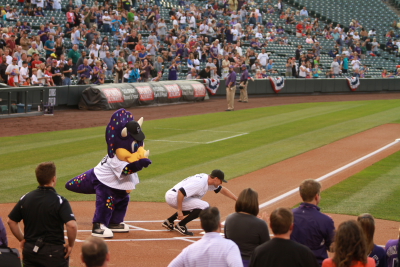 It was not that bad of a throw a little short of the plate but Matt Belise reached for it and Dinger gave her the strike! It was not a bad call, I have seen worse from the umps! 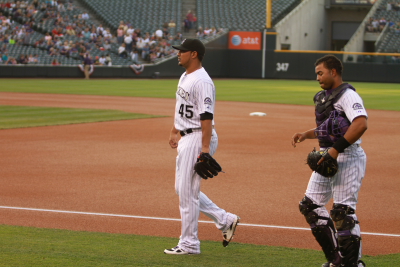 Jhouly Chacin and Wilin Rosario heading in from the bullpen.

Here he is throwing the first pitch to the Diamondbacks Adam Eaton(not the Former pitcher) So you see me mentioning this There was an Adam Eaton that played for the Rockies in 2009 and 4 other teams. Including Padres, Phillies, Rangers and Orioles. Here would hit a single and he would score on a Juston Upton double. Upton would score on a Paul Goldschmidt double, Goldscmidt scored on a Jason Kubel singleD.J. sliding into 3rd in the 2nd.

D.J. LeMahieu slide into third for a triple in the 2nd. Andrew Brown hit a solo Lead off home run for the Rockies first run of the game. D.J. would score on a Jhoulys Chacin single. (3-2) D’backs. 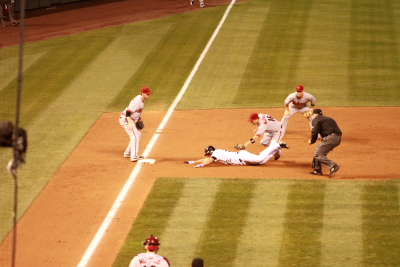 Jordan Pacheco tried to stretch a double into a triple thinking the play was at home but it was cut off by the D’backs short stop John McDonald.

The call was out it does look like he missed the tag and if he did tag his foot was his hand on the base. It was a close one.

The Rockies did take the lead in the game because Jhoulys Chacin and Josh Rutledge scored before the out was made. (4-3) Rox

Wilin Rosario hit his 26th home run of the season to break the all time Rockies Rookie record of 25 home runs in a single season. Todd Helton previously held the record. 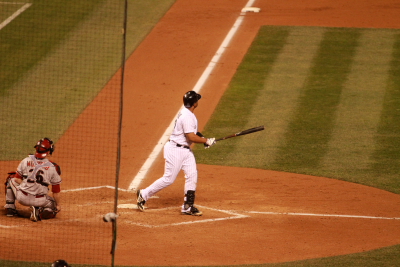 He watches as he makes Rockies history.

Way to go Wilin. He has been a great benefit to the Rockie offensively this year,  now if he can only be able to keep the baseball in front of him on defence he will be a real benifit. (5-3) Rox

Chris Nelson hits a double in the 3rd and was left on base.

After this I gave up my camera and Rachel took a few photos. 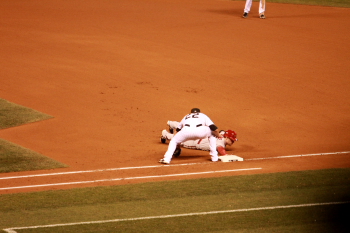 Many did included Pachecos butt! 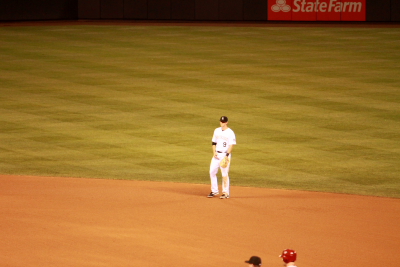 I do not support or condone these photos but come on it is kinda funny. She did also get a few good ones of the pitchers. Including Chacin and Carlos Torres.

After I got the camera back I did not take many more photos.

Here is one of Carlos Gonzalez being brushed back while pinch-hitting in the 9th. Carlos is on a quest of his own for 100, 100th home run of his career. As with many game the Rockies did not hold the lead. The D’backs scored 5 runs in the 6th. To take a 8-5 lead. The Rockies gave and score 1 in the 6th. (8-6) D’backs. They than again scored in the 7th to come within 1. But could not fully catch up and that was the single.  Chacin went 4 inning giving up 7 hits and 3 runs not bad he left the game with the lead. Over all he has been pitching well since his return from the disabled list.

That is it for this one 2 left in the series and 4 for the year. I am still one game behind which should be posted shortly!!!!!

I will be at the 4 remaining games at Coors. 1 more against the Diamonbacks and 3 to finish the home season against the Cubs. I already attended the Sunday game. I think they covered the spread. Hint the final was a football score. But you probably know that. So you can look at the pictures for the next post!!!!

Well See you at Coors.