For the last few years I said I would like to go to a baseball game with just my ticket and nothing else. If anybody has seen me at game I carry a backpack that weighs about 25-30 Lbs. It is loaded with Camera Equipment, baseballs, a glove, baseball cards, photos, snacks, a water bottle and other accessories for all the above. 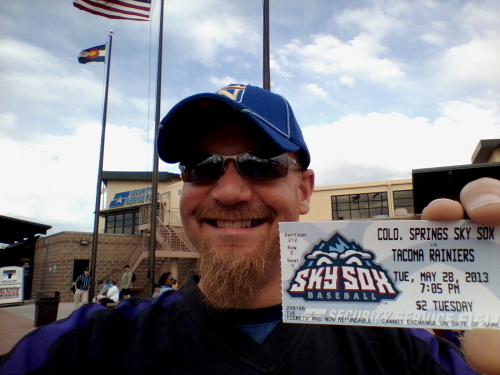 Normally when I go to the Springs and other minor league stadiums I reduce the amount of stuff I bring and put it into a smaller bag that I have. Since last year I have been using a laptop looking bag. So I packed the bag with a few baseballs, camera and cards. As I was walking out of my house without realizing I grabbed the wrong  laptop bag and brought the one I use for work in it which well doesn’t have anything I need in it except a blue pen. I did not know I grabbed the wrong bag till I got to Security Service Field which is about 7o miles from my house. so I was not driving home to go get it I would miss most of the game and it would cost way to much in gas to go get the correct bag. So I made the best of it. One thing that did suck about this was I was planning on having one of my favorite players as a kid autograph a few cards and a Ball. Which I now did not have. The player was Howard Johnson who played for the Mets when I was a kid and is now the hitting coach for the Tacoma Rainers.

I did get to meet him and took a photo but did not have anything for him to autograph. Amy did have him sign a Seattle Mariners team card and gave it to me which was cool but still was not the Shea Stadium ball I wanted him to sign or the baseball cards I had since I was younger. I was great being able to meet him but wish I had my items autographed. So I looked at the schedule for when the Rainers were back at the Springs and I have another chance to get my stuff signed on June 18th. It was the day I was planning to leave for my road trip but I am going to delay it a day or 2 so I can get my autographs!

It was interesting not having anything for players to autograph including a few photos I had printed earlier in the day for Sky Sox players and stuff I needed Aaron Cook to sign who I also got to say hi to after the game. I have a few cards to finish a few Rockies sets and a 2010 team ball for him to sign which was also in the bag. 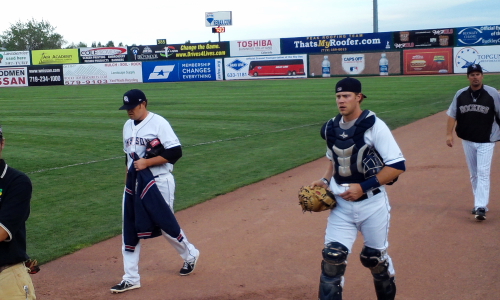 Drew Carpenter was the starting pitcher for the Sky Sox. Here he is with Lars Davis heading in from the bullpen. All the photo in this post were taken with my phone. this is the first time I am entirely putting together a post with photo just from my phone. 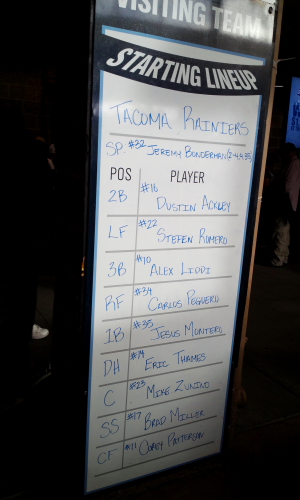 Here are the line ups for the to teams. Sky Sox on left and Rainers on the right. 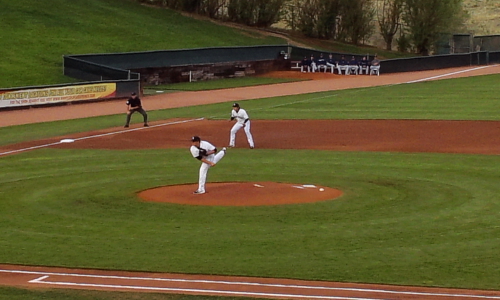 Drew Carpenter throwing the first pitch to the Rainers Dustin Ackley. carpenter would get the Rainers out in order in the 1st.

Since I did not have my camera  and I didn’t need to take photos I decided to go get a $2.00 beer. Which is basically a small cup of Coors or Coors Light from kegs that must have been left out in the sun since last week and than re cooled before the game. So I missed the Sky Sox 1st inning 1 the line was slightly wrong and 2 they had trouble with the keg pressure and they were not pouring. Thanks to Jared who also keeps scor I was able to catch up on my scoring!

The Rainers got a few hits in the 2nd  Carlos Peguero started the inning with a single followed up by a Jesus Montero double.

Dustin Ackley at bat in the 1st inning. Before the beer expedition.

The staring pitcher for the Rainers was Jeremy Bonderman.

Matt McBride lead off the 6th inning with a game tying the game at 2. Tyler Colvin hit a solo home run to break the tie and the SkySox took 3-2 lead. So I guess that was a TY Break Home run!

The Rainers would score 3 runs in the 7th 1 by a Mike Zunino home run, a walk to Brad Miller who also scored . The third run was scored by Corey Paterson. The Rainers took a 5-3 lead.

The Skysox did try to come back and did score 1 in the 7th but fell short. The Final score was 5-4 Tacoma. 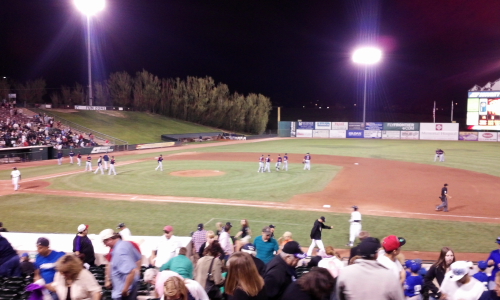 The Rainers celebrating their win over the first place Skysox. The Rainers and play 3 more games this week.

It was a interesting night in the springs. Not doing my normal thing, but a great night anyway. got to meet one of my favorite players as a kid and got to just enjoy a game with out all the other distractions!!! Pesky camera and autograph stuff!!!!

I did manage to help Amy and Jared with a few autographs I got a Rainers player for Amy and 2 cards for Jared a drew Pomeranz and a Glenallen Hill card signed.

So that is it from the Springs the Rockies are returning to Coors this week and I will be there starting Wednesday against the Houston Astros who they just split 2 games with them in Houston. This weekend is the first trip the L.A. Dodgers will be at Coors this year.

I will see you there!

The 2 culprits in me grabbing the wrong bag! The one on the left is full with baseball stuff the one on the right with random work stuff!