This could be my 34th game of the year it is a good possibility!

It being Sunday it means it was autograph Sunday. The best part was we did not have to get there extra early because of the bobble heads there was no bobble head today. This means I can also get more than one player! 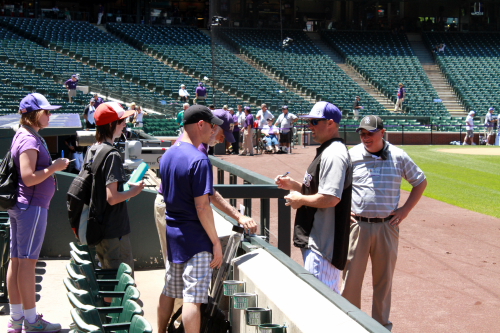 The signers today was Michael Cuddyer who is in the Photo above. Matt Belise, Manny Corpas and Tyler Colvin. So started out in Matt Belise’s line because I had a photo of him that I printed up a few weeks ago. After getting that signed I headed to Manny Corpas’ line since he was just called up I needed him on my team 16×20 which I now only need Tulo on! since it was not a bobble head day the lines were not crazy and I was able to hit the trifecta getting Tyler Colvin as well I got him on a Cubs team card he was on and the last card I had left for him to sign he has recently been called up also but I did not need him on my 16×20 because I had him sign it at spring training. I did not think that he was going to the Springs! I did not get Michael Cuddyer to sign anything because I really did not have anything for him since he has signed well for the fans in the past and he was already on the 16×20. 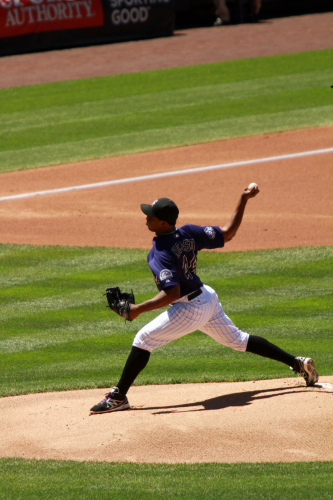 Juan Nicasio was the starting pitcher for the Rockies he would sit the Padres down in order in the 1st Evereth Cabrera started by grounding out to Todd Helton at first. Alexi Amarista struck out and Jedd Gyorko flew out to Carlos Gonzalez. 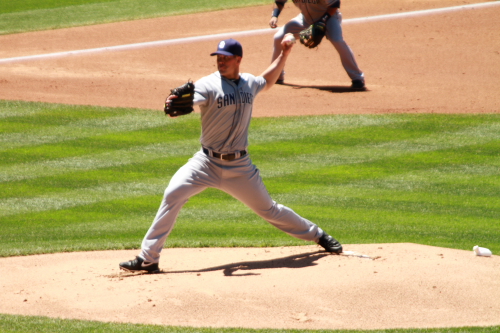 Clayton Richards was the starting pitcher for the Padres Dexter Fowler started off with a single and was sac bunt over to second by Eric Young Jr. Carlos Gonzalez popped out for the second out of the inning. 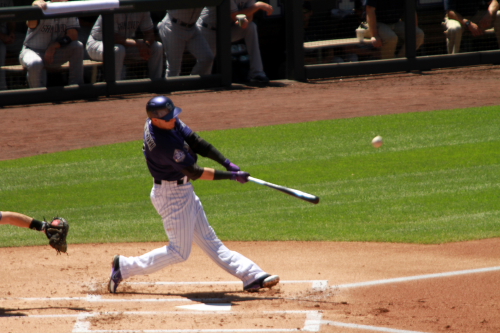 Troy Tulowitzki came through with a home run to give the Rockies a 2-0 lead. 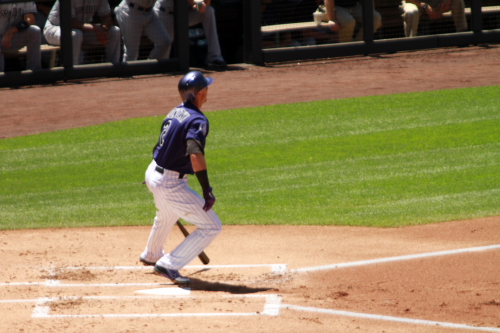 Here he is watching it fly into the tunnel in left field. 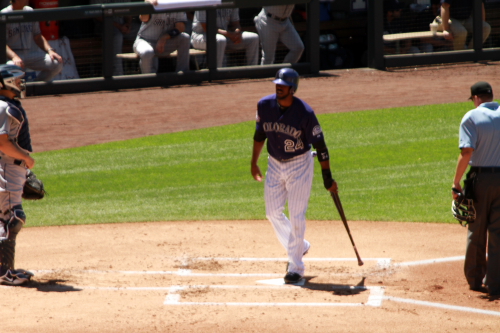 Dexter Fowler picking up Tulo’s bat as he crosses the plate. 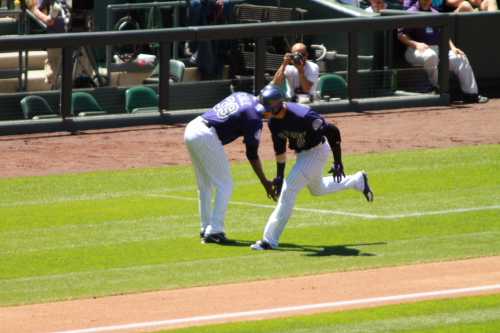 Would this be considered a five-lo! 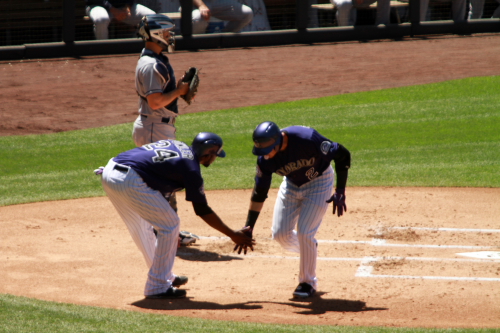 This one with Dex while blowing a bubble.

The Rockies would not score again till the 3rd inning when Dexter lead off with a double and scored on a Cargo ground out to second base. He got to third on a Eric Young Jr. sac bunt once again. (4-0) Rox

In the top of the 6th I noticed something was happening here! 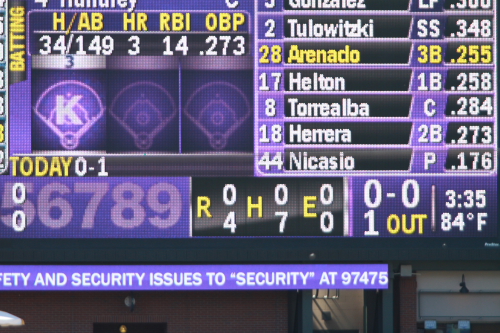 Juan Nicasio was perfect through 5 innings. No Runs or walks!

Not lasting long Nick Hundley took that away with the swing of the bat with a 2-2 count sending the ball and the perfect game into the pavilions. That would be 1 run for the Padres and they scored a second before the end of the inning. (4-2) Rox

The Padres would score 3 in the 7th and 2 in the 8th. They would take a 7-4 lead this is another game that should not have gotten away from them. Cameron Maybin hit a home run for the first run of the 7th off Edgmer Escolona who came in to pitch the inning. The next 2 runs were scored on a Mark Kotsay home run scoring himself and Headley still in the 7th. (5-4) Padres  Edmer was taken out of the game because of injury. Wilton Lopez would finish the inning. Matt Belise came in and pitched the 8th for the Rockies. The 2 runs scored by the Padres were a result of a few hits strung together Kyle Blanks hit a single and was scored by Will Venerable who scored on a Denorfia single. (7-4) Padres 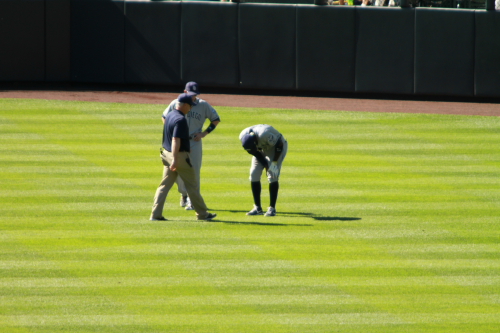 Cameron Maybin was limping a little after a Tulo GRDB in the 8th inning. Tulo would not score another runner left in scoring position. He got on base with one out and could not get past third.

The Rockies tied the game at 7th in the 9th. Tyler Colvin hit a single scoring Jonny Herrera and a Carlos Gonzalez double score Tyler and Dex. (7-7)

The game than went to the 10th the Padres failed to score and the Rockies need to act on this opportunity. Todd Helton started the inning off with a walk in a sac bunt attempt Yorvit Torrealba struck out on the foul bunt. Jonny Herrera hits a single to move Todd to second. 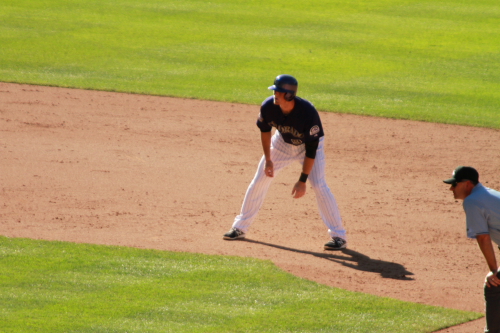 Jonny would get out at second on a Colvin hit to first. 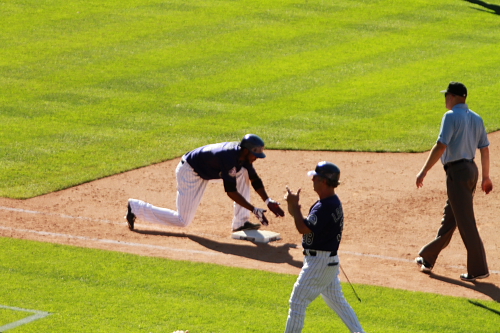 Dex after reaching first base kneeling and clapping 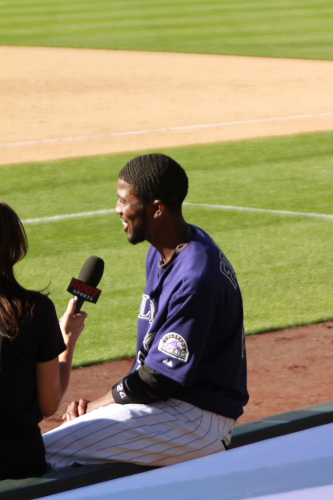 Dex being interviewed after the game.

This is another game that should not have gotten away from the Rockies. I think this should have been a easier series for them than they made it. The Padres really made them work for their wins. It is great that they did battle back to win Fridays and this game, but both should have been pretty much over when the Padres came back to take the lead or tie the game. There once again was a lot of lost opportunities to score runs and get out of the defensive side of the innings.

Well That is it for this game and the series.

The Nationals are in town Tues thru Thurs.