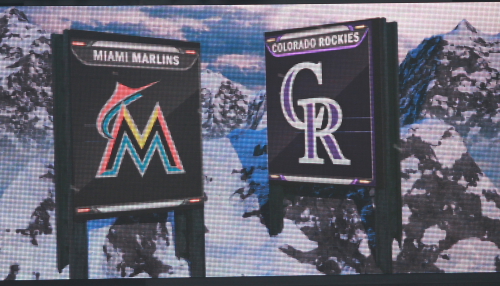 Jorge de La Rosa was the starting pitcher for the Rockies. He struck out the Marlins first batter Adeiny Hechavarria He then walked Christian Yelich this was the 4th time in 5 MLB at bats he was on base. After the walk to Yelich he struck out Giancarlo (Mike) Stanton gave up a single to Ed Lucas who got out at second on a Placido Polanco hit to Rockies third base man Nolan Arenado who threw it over to D.J. LeMahieu at second for the third out of the inning. 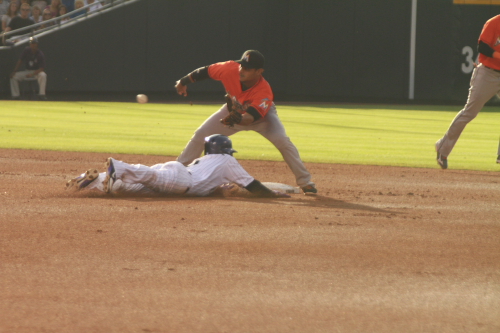 In the Rockies first Dexter Fowler would fly out to left field and LeMahieu hit back to Miami’s pitcher Jacob Turner who threw to first for the second out Carlos Gonzalez hit a single but was caught stealing at second. I think he was safe but can’t fully tell but by where his left hand is and the ball is I think the left hand hit the bag before the ball hit the glove.

For a few days people were mentioning that they have not seen Roy Oswalt around well there was a siting he was in the dugout for this game.

The Rockies scoring began in the 2nd inning after Todd Helton hit his 579th double of his career with 2 outs. He than scored on a Nolan Arenado double. The 579th double now puts Helton in soul position of 19th passing Wade Boggs who he was tied with at 578. Next on the list is H.O.F Cap Anson. Played from 1871 (his career started 102 years before Helton was born) Anson played for 26 years with the Rockford Forest City’s, Philadelphia Athletics and Chicago White Stockings/Colts. He also managed during his playing career for the Athletics in 1875 and 1879-1897 for Chicago. He was inducted into the National Baseball Hall of Fame in 1939, 17 years after his death at the age of 69.

Now back to the game.

The Rockies got the lead 1-0

Not Much happened till the 5th inning when they scored their 2nd run of the game. When Yorvit Torrealba scored on a LeMahieu sac-fly to center. Torrealba got on base with single advanced to third on a Fowler single. (2-0) Rox

No this is not #580 it was a single that resulted into an extra base when the Marlins Hechavarria made a throwing error to first. Michael Cuddyer did get out at second but Todd was not doubled up and advanced to second. 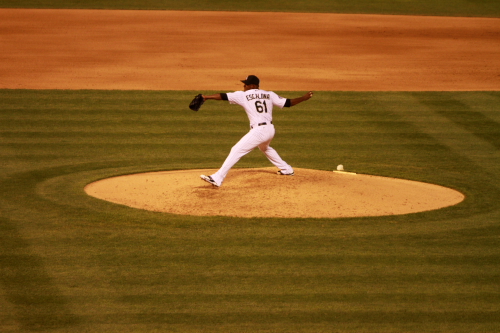 De La Rosa pitched a great game he pitched 6 scoreless innings and gave up 5 hits, walking 1 and striking out 5. Edgmer Escolona came in and pitched in the 7th. He let up 2 singles and hit pinch hitter Gregg Dobbs.

Josh Outman then came into pitch to Yelich and after striking him out was replaced by Wilton Lopez.

Wilton pitched to Stanton and he hit to third and Arenado touched the bag to get out Jeff Mathis.

After walking in the 8th Michael Cuddyer stole second base.

The Rockies were only up by 1 in the 8th The Marlins picked up a run with a little small ball off of struggling reliever Matt Belilse. Besides the run he gave up 3 hits. He did strike out Justin Ruggiano to end the inning.

Rex Brothers came in for the save in the 9th besides the walk to Stanton who would end up being the last out of the game on a force at second he pitched well striking out Hechavarria and Yelich grounding out. Yelich did not have as good of a game as his debut the only time he was on base this game was on the 1st inning walk he was 0 for 4 his next 4 at bats. 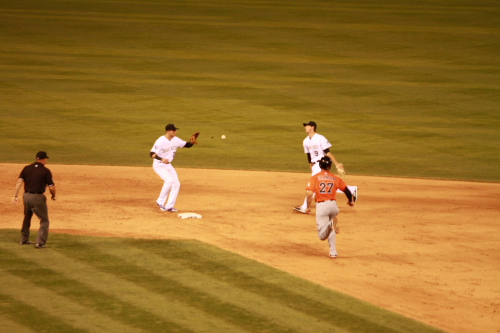 LeMahieu tossing to Tulo for the last out of the game.

Torrealba and Brothers high-five after the out and that was the game. The Rockies won this one 2-1.

Well that is it for this one as I continue to play catch-up with this home stand I have 1 more from this series and the 3 against the Brewers. Check back to see those photos.

Also remember I am doing a contest, Answer the question besides Jason Jennings who are the other 3 Rockies pitchers to record 10 wins before the All-Star break. Name 2 of the others. email: Rox_addict@yahoo.com with answer there is a under score between the x and a.