Padres vs. Rockies game 3 of series. 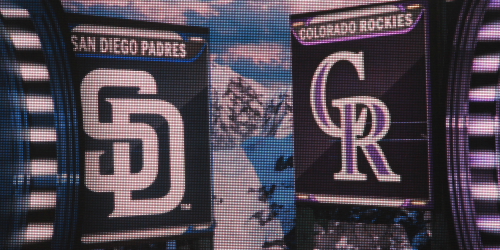 Today being a day game there was no batting practice. so it was a lot of time and try and get autographs at the wall. It was a pretty good day for that because I had a few new photos printed up. So I got Rex Brothers to sign a photo. Then Carlos Gonzalez signed after he was done working out on the field. I had him sign the photo of him being interviewed at Fenway Park by Cowboy and Jenny. I then headed over to the pre game set and got Cowboy and Jenny to sign it. I also had him sign a card.

Here he is signing along the wall. While he was signing Robert asked him if he had a glove for him that he promised him a few years ago. so after he was done signing he ran down to the clubhouse and a few minutes later came out with this…

Before the game Kurt Bucsh throw out the first pitch. 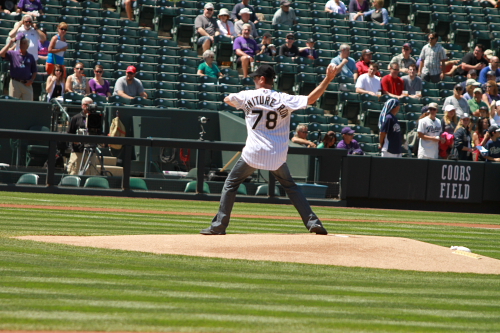 He is currently the driver of the #78 car in the Nascar Sprint Cup Series They are the Denver area based team and the only Nascar team base west of the Mississippi. I have met him once in the garage in Charlotte when he was driving the Miller car. So it was kinda interesting to see him in Denver throwing a baseball. Other furniture row drivers have also thrown out the first pitch in the past.

Jorge De La Rosa was the starting pitcher for the Rockies. He put the Padres down in order in the first and second inning.

Corey Dickerson with 2 outs did it once again he hit a double. This was his 7th since being called up and 3rd this series.

He would then score on a Michael Cuddyer double to give the Rockies a 1-0 lead.

The Padres tied it in the 3rd with a run on a Chris Denorfia single score Ronnie Cedano from second.

dexter Fowler lead-off the 3rd with a single and scored on a Corey Dickerson triple. His second since being called up. Dickerson scored on a Troy Tulowitzki single. (3-1)Rox

The Padres would get one back in the 4th inning to make the score 3-2 Rockies. After Jedd Gyorko hit a one out doubled and scored on a Jesus Guzman single.

After the 3rd the Rockies sat down in order for 4 straight innings. De La Rosa pitched 7 innings allowing 2 runs on 8 hits striking out 6 and walking only one batter. Chris Denorfia in the 5th.

In the 6th inning Yorvit Torrealba made one of the most interesting double plays I have seen in along time if not ever. With Jedd Gyorko at third and Jesus Guzman at first, Logan Forsythe hit a ball to Nolan Arenado at third who threw home to Yorvit he chase Gyorko back towards third and tagged him while that was happening Guzman started running to third after Yorvit tagged Gyorko he dove in front of Guzman for the out at third. He made an unassisted double play at third base.

This is him after the play. I did not have the camera ready and could not get it fast enough to get the play. Really wish I had the whole sequence.

Tulo giving him the fist bump after the play. People at the beginning of the year asked why we got him back it is plays like this. 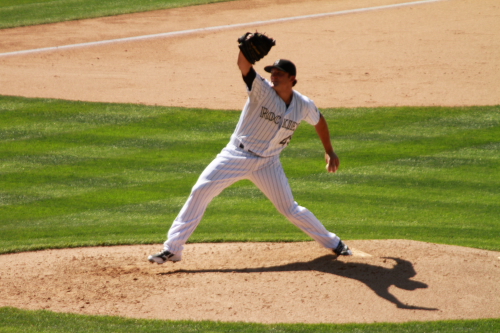 Matt Belilse Pitched the 8th for the Rockies. Getting all 3 batters he faced out in the inning. 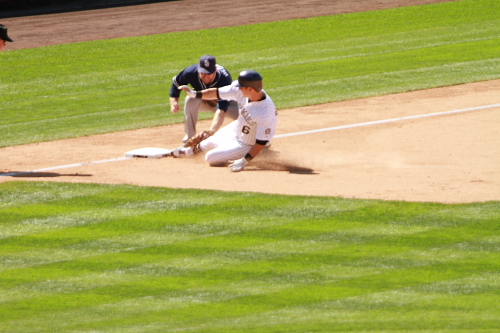 Corey Dickerson trying to stretch a sure double his 8th, into a not so much triple being tagged out at third after a soft hit over Cedano’s head at short. Dexter Fowler did score the Rockies 4th run of the game on the hit by Dickerson.

After a strike out looking to end the 8th inning look who is arguing with the ump?!!

Rex Brothers pitched in the 9th inning for the save his 11th of the year. Rafael Betancourt did return during the road stand and will be the closer again.

The Rockies went on to win this game 4-2.

Corey Dickerson was player of the game going 3 for 4 with 2 double and a triple and 2 RBI’s and was batting .321 after this his game in 33 games with 78 at bats. 12 for extra bases including his 2 home runs. 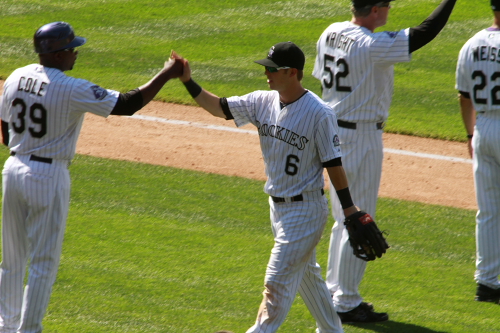 I think this will not be his only player of the game he seems to have quite a future with this team hope he keeps it up.

So that is it for this home satnd the Rockies were a very good 5-1 in the series with the big sweep against the Pirates and taking 2 from the Padres. They are currently 1-2 on the road trip losing the 3 game series to the Orioles.

Well with the season quickly dwindling see you at Coors when the Rockies are home against the san Francisco Giants next Monday the 26th.