Game 3 of series and of the year!

This being a Sunday there was no bating practice so I still have not gotten a baseball this year! It was the first autograph Sunday of the year and the signers where Chad Bettis, Jordan Lyles, Tyler Chatwood and Charlie Culberson. I got Jordan Lyle on both of my team projects the 16 x 20 and the Spring training magazine. Later at the wall I got Chad Bettis in the magazine as well. So making some progress with the 2 projects.

Today Brett Anderson started for the Rockies this was his second start of the season and first at Coors.

He started out well getting the first 2 batters out in the inning he threw 3 pitches between them. Then Paul Goldschmidt hit a single followed by a Martn Prado double, Mark Trumbo was walked to load the bases and Anderson struck out Miguel Montero to end the inning and work himself out of the situation.

The above photo was the first out of the inning A.J. Pollack grounded out to Arenado who tossed to Cuddy at first.

Wade Miley was the starting pitcher for the Diamondbacks.

Charley (Chuck Nasty) Blackmon started the game off like he has all weekend and that was with a single that he was originally called out and Walt went for the challenge in the first at bat of the game. 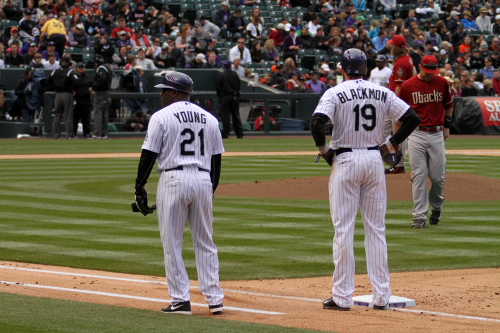 Blackmon standing on 1st as the play is reviewed by umpires. The call was overturned and was ruled a single. That was the first review of a play in Coors Field.

He would then be out at second when Michael Cuddyer hit to the D’backs short stop Chris Owings.

The D’backs started getting some runs in the third inning. A.J Pollach started the rally with a lead off single and that was followed by a Aaron Hill single and both scored on a Paul Goldschmidt hit to third that was and error on Arenado and the ball headed to left field. Goldschmidt ended up on second. (2-0) D’backs

The D’backs scored 1 more in the 4th when Wade Miley contributed with a single scoring Owings and 2 in the 5th on a Mark Trumbo home run. This was his 4th consecutive game hitting a homer and his 5th of the year.

The Rockies did score a run in the 5th. after Wilin Rosario started the inning with a double advanced to third on a wild pitch and scored on a Drew Stubbs sac-fly to right field.

The Rockies scored again in the 7th, scored by Troy Tulowitzki on a Nolan Arenado sac-fly to center. They got a third in the 9th (5-3) D’backs

Cargo scored the run. Above he stole second and the ball headed into center field and he would head to third and scored when Rosario would hit into a double play getting Tulo out at second and himself at first. After Arenado flew out the game ended and the 3 runs was not enough to sweep the Diamondbacks this Opening Weekend.

The Rockies will have their first interleague series of the year against the White Sox Monday-Wednesday.