My 15th Coors Game of the year.

Before the game Justin Mornea was awarded his watch for being the National League player of the week.

It was presented to him by the Rockies Hitting Coach Blake Doyle.

He was the second Rockies to get it this month, Charlie Blackmon won the earlier in the month of April.

Franklin Morales was the starting pitcher for the Rockies. He started the game with Juan Lagares flying out to left field. Then things started to get real ugly for him and the Rockies. Daniel Murphy hit a triple followed by a David Wright double, he walked Chris Young. By the time he got out of the first inning he faced 7 Mets batters and they scored 3 runs.

Jenrry Mejia started for the Mets he struck out Charlie Blackmon to start the inning. He then walked Drew Stubbs and Carlos Gonzalez flew out, Stubbs made a interesting third out and that was he ran to and past 2nd base on the Cargo fly out and after the catch by Chris Young in left field he ran back to first but was said that he never stepped back on second before returning to first and was doubled up at first base. 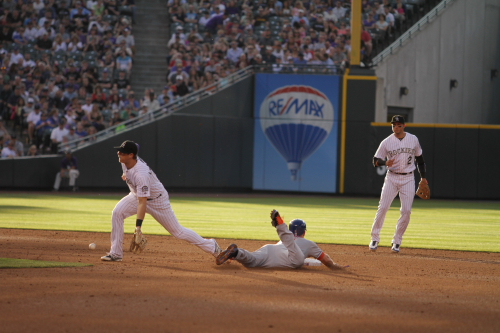 They kept that 6 run lead till the 5th inning when the Rockies fought back with a huge inning lead by a Ryan Wheeler solo home run to start the inning. 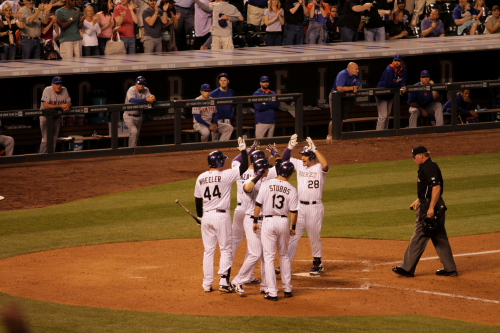 After a series of single and walks Nolan Arenado came to the plate with bases loaded and proceeded to hit his 2nd Grand Slam of his career to give the Rockies a 8-6 lead. After Arenado’s homer the Mets replaced Meija with Daisuke Matsuzaka.

Arenado celebrates at home-plate with his teammates that were on base when he hit his home run.

In the 6th inning the Mets would score  2 runs with Chris Martin on the mound. Martin was replace with Rex Brothers after the first run scored on a Chris Young double. Rex gave up a single to Curtis Granderson to Score Young. The score was now 8-8. 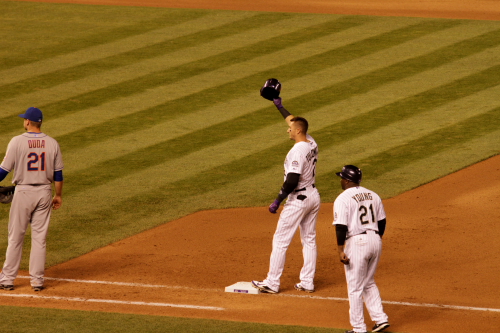 The Rockies took the lead in the 7th inning on a Jordan Pacheco sac fly to center field and Tulo scored from third. Tulo got on base in the 7th with a single and it was his 1,000 hit of his career. So congrats to him. Even know I am not the biggest Tulo fan I do have to give credit when credit is due! This year he seems to finally be hitting timely and is performing the way the regular fans had expected him too for the last few years. This is probably the best start to the season he has in the past 3 or 4 years now lets hope he stays healthy and keeps it up before he gets traded to the Yankees!! Had to get a dig in somehow! The Rockies had a 9-8 lead at the end of the 7th. 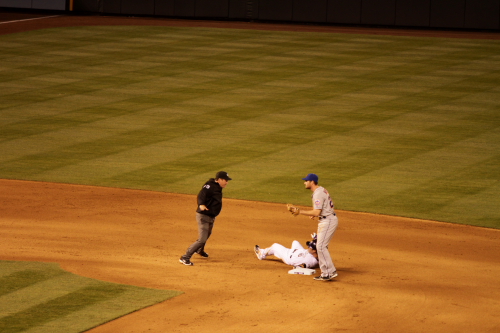 on the same play Tulo scored on Corey Dickerson advanced to second in a close play after tagging up at first. 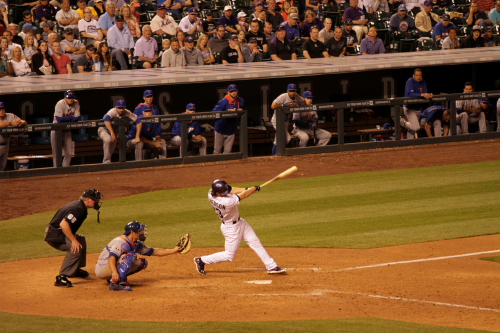 Then with Tulo on second after getting on base after  his 1,001 hit of his career, Charley Culberson and his .111 batting avg. came in to pinch hit for the pitcher La Troy Hawkins. On the 1-2 count he took a 96 mph fast ball thrown by the Mets pitcher Kyle Farnsworth for a 2 run walk off home run it was awesome to see Charley come through with this huge homer for his first of the year. He was brought back up to the Rockies from the Springs because of Michael Cuddyer going on the disabled list. He was originally sent back to the Springs because he was not hitting for the first month of the season.

Charlie (Chuck Cobra) runs the base as the Coors crowd goes absolutely crazy after his home run. 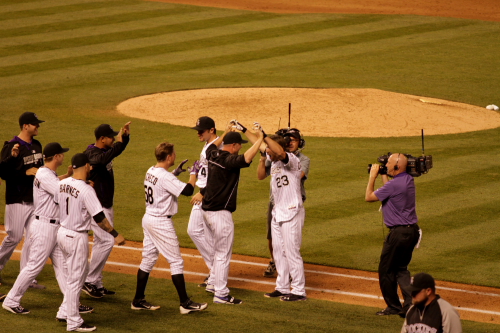 I filled my card while he ran the bases and missed him stepping on home but got him as he came back to the 1st base side. Celebrating with Michael Cuddyer.

La Troy Hawkins picks him up and carried him towards the dugout after getting him the win!

During his interview with Marc Stout Brandon Barnes dumbed the Gatorade bucket over him and then he continued the interview with Dinger bowing to him!!!

What a incredible game that looked like it was going to be a rough lose early and in true Coors fashion and the fight that this team has this year they won it 11-10.

What a great night of baseball

Tomorrow the Rockies will be facing the Mets for the 4th time and Jhoulys Chacin will make his 2014 debut as he come off the disabled list and the Rockies go for the series sweep. Unfortunately I will not be at this game because of scheduling issues at work and this will be the first Sunday game I have missed while in town in over 3 years. I do miss a Sunday game while on my road trip in the summer.

So that is it for this game.

I will be back at Coors for the 2 games Monday and Tuesday when the Texas Rangers are in town.