My 16th game at Coors this year.

Before the game I headed in and went to the Pavilions for batting practice within a few minutes. Tommy Kahnle picked up a ball from the warning track and said high and he tossed it up to me. This was only my 4th ball of the year. It was pretty cool because I usually do not get to many toss ups. Then I head over to the first base wall to see if I could get some autographs and Brandon Barnes was one of the first to sign and I had just got a photo of him printed of his triple on opening day. Charlie Blackmon and Mike McHenry signed. So while I was standing there Marc Stout from root sports came up to me and asked about the 2 photos of photos I took of Charlie Culberson on Saturday night. He said that Charlie really like him and I said I had extra copies of them on me and he said he would send him over. Charlie then came over and I gave him a the photo of his swing and the black and white of him running to second from first. He also signed a copy of each for me.

both photos appear in my post about Saturdays game:

I thought that was cool that he saw the photo’s on twitter and I was able to get copies of them to him.

Jordan Lyle started the game for the Rockies he had an incredible outing He got the first 6 batters out, that he faced and the Rangers did not get a hit off him till the 3rd inning, it was a double by Elvis Andrus.

Martin Perez started for the Ranger he has been pitching very well this year and then he came to Coors!! After a pretty efficient 1st inning, where he struck out Brandon Barnes and got drew Stubbs and Troy Tulowitzki to ground out. The second inning things changes as Carlos Gonzalez started the inning with a a double and Nolan Arenado he a 2 run home run to left field to give the Rockies a 2-0 lead. Before this game Perez went  46 inning without having a homer hit against him and went 26 inning without giving up a run.

with 2 outs D.J. LeMahieu hit a ball to Rangers third baseman Adrian Beltre. who threw to Prince Fielder at first and it thrown high and Princed got the ball and tagged D.J. the ball fell out of his glove and the umpire called him out. Walt Weiss came out and used his challenge and the call was overturned. here’s the link to the play :

With the challenge that brought up Jordan Lyle who has been hitting well, but did strike out in the at bat. Someone said it was weird to do that to get to the pitchers spot. I thought it was a good idea, because Lyles can hit and if he got out which he did it flips the line up so Brandon Barnes would hit lead off in the 3rd. inning. Barnes did lead off the 3rd and it benefitted the Rockies when he hit a lead off double and would score  the Rockies 3rd run of the game, on a Cargo sac out.

The Rockies scored 2 additional runs in the 5th and 7th inning both the same way Drew Stubbs got the first hit of each inning a double and both were followed by a Troy Tulowitzki home run. Tulo has been hitting like crazy lately batting almost .600 at home and over .400 for the year. Once again it is great to see him hitting and playing the way we knew and expected him to hit over the past few years. He must be seeing beach balls being thrown by the pitcher. He also just won the April MLB player of the month and is making a case to get it in May as well.

The Rangers did score a run in the 6th inning. Shin-Soo Choo started the inning with a double and advanced on a Drew Stubbs error in center. Choo then scored on a Josh Wilson ground out to Tulo at short stop. The Rockies had a 7-1 lead. 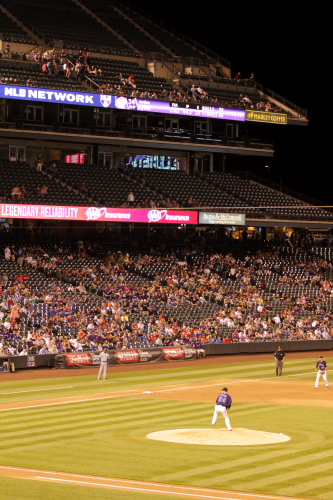 This is what a Rockies pitcher looks like pitching in the 9th inning, he almost went the distance.  He also batted, hit a single and scored the Rockies 8th run in the 8th inning. Like I said earlier he had an incredible game and kept the Rockies in this game.

He was removed in the 9th after Beltre hit a lead off single in the 9th. He gave up 7 hits and 2 runs the second was Beltre in the 9th. He struck out 5 and only walked 1 in his full 8 innings he pitched He pitched 104 pitches 71 for strikes. 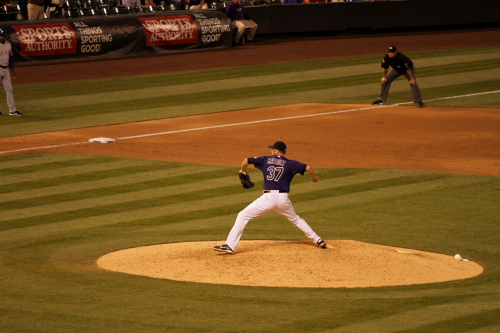 Nick Masset pitched the remainder of the game. Masset was just called up from Colorado Springs, the first batter he faced was Prince Fielder who he walked then Alex Rios hit into a double play. He then gave up 2 single and the second Rangers run scored. The run really did not matter when you are up by 6. I would have left Lyles in till he was in a little more trouble then just giving up a single. But the Rockies got out of the inning and took he game 8-2.

It was another great start for Lyles who has been pitching great since his call up in early April for an injured Tyler Chatwood and kept himself in the starting spot and is now 4-0 with a 2.62 ERA. The Rockies are now 20-14 and 2 games back of the first place Giants.

So that is it for this one and the Rockies have another game at home before heading to Texas for 2 and then continue on a road trip to Cincinnati and Kansas City.  I will be in Kansas City for that 2 game series first mini road trip of the year!!!

See you at Coors and Kaufman!

I also have to Thank E to the MNF’n B Yo for getting 5 guys on my 2014 team project since I was not able to make Sundays game he brought my 16×20 to the game and got me Ryan Wheeler, Chris Martin, Eric Young and Mike McHenry. Then this game got Blake Doyle while I was waiting for Charlie Culberson thanks E to the MNF’n B Yo!!!!