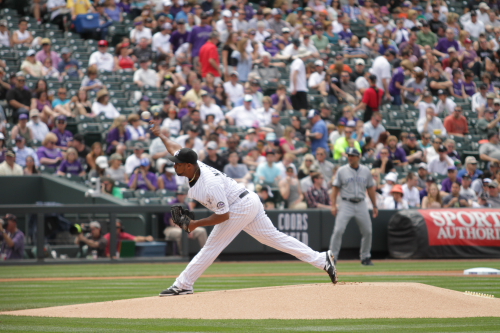 The Starter for the Rockies was Juan Nicasio. The Padres got a quick run with their second batter Seth smith who hit a solo home run with 1 out. Juan allowed 2 other hits in the inning a single to Carlos Quientin and a Jedd Gyorko double. The Padres lead 1-0.

Yonder Alfonso argues a called strike in the 1st. He argued it for a good amount of time and was not tossed. This was just the beginning of a lot of inconsistent strike calls through out the game. Which has been a trend with this umpiring crew all series. 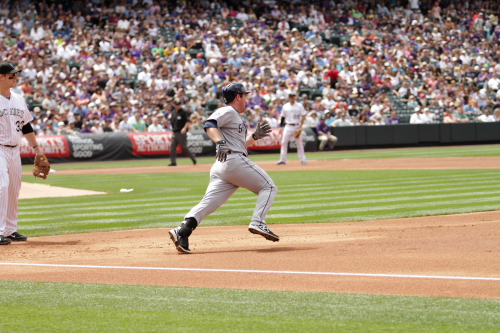 Gyorko makes the turn at first for his 1st. inning single. 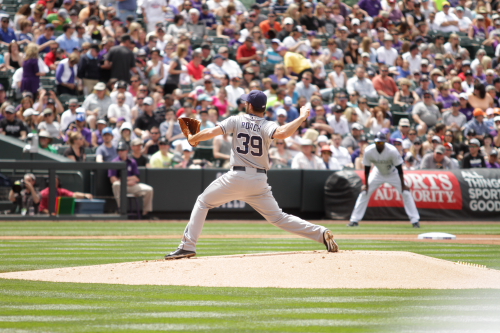 The starter for the Padres was Donn Roach. He walked Charlie Blackmon to start the game on 5 pitches. Sometimes a inconsistent strike zone isn’t a bad thing!

Charlie Blackmon then stole second base.

He was called safe originally and after a review was called out the view they showed at the stadium it was kind of inconclusive which means the call should stand but it was reversed by the umps in New York and Charlie was called out. 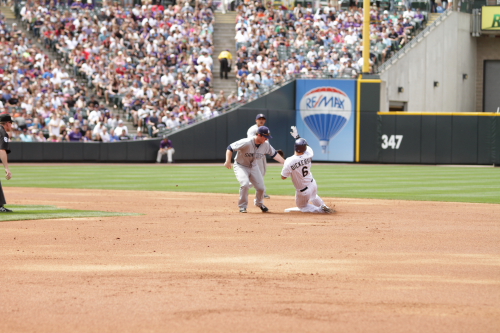 After Corey Dickerson also walked and attempted to steal he was called safe also. After the second review that was also overturned. Now my question is if the ump at 2nd got 2 in a row wrong should he remain a ump in the Major Leagues. This is also the ump with the bad strike zone on Friday night that ejected Nolan Arenado and got even D.J. LeMahieu to start arguing strike calls.

The Rockies did something that has only happened 2 other time in their history and that was a triple play. The play started with Carlos Quintin hitting to Nolan Arenado at third who threw to D.J. LeMahieu at second and to Justin Morneau at first. the original call was safe at first but the second base umpire called interference on Seth Smith who reached out and hit D.J. in the leg with his hand for a 5,4,3, triple play.

Nicasio continued to pitch well and the Rockies scored their first run of the game in the 3rd inning. A Charlie Blackmon single scored Wiin Rosario who lead off the inning with a single. This was his first at game back after being on the 15 disabled list with the flu. D.J. also scored on Blackmon’s hit. The Rockies took a 2-1 lead. Corey Dickerson hit a 2 run home run to left to give the Rockies a 4-1 lead. 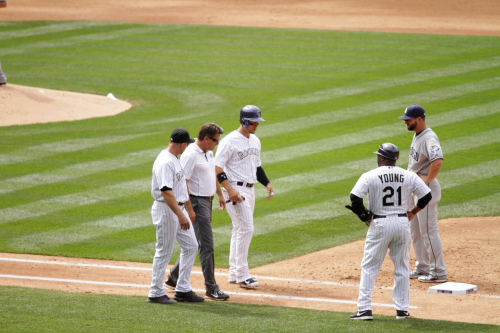 Later in the inning Carlos Gonzalez was hit in the knee with a pitch to get on base the inning did end on a double play hit by Arenado.

The Padres did pick up 2 runs in the 4th and they switched pitchers in the bottom of the 4th a Tim Stauffer came into pitch for them.

Roach pitched 3 innings giving up 4 runs, 4 hits and walked 2 with no strike out. 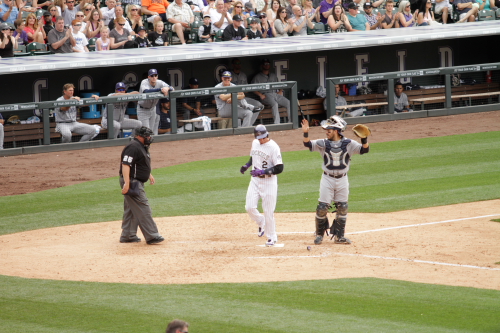 The Rockies got a 5th in the 5th with a lead off  solo home run by Troy Tulowitzki. He also scored in the 7th inning on a Cargo single. The Rockies had a for a 6-4 lead. The Padres scored 2 in the 4th and 1 in the 6th. The 6th inning run was a Rene Rivera home run.

LaTroy Hawkins came into the game in the 9th and the game got interesting! After a Wil Venable lead off double, Evereth Cabrera hit a home run to tie the game. This was Hawkins 960th appearance and first blown save of the year. 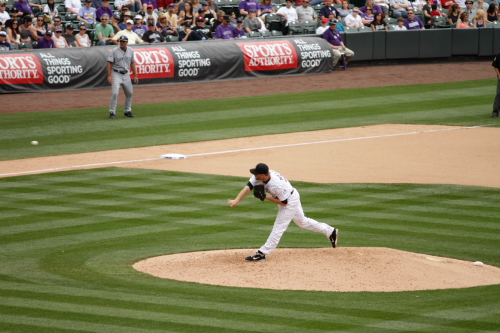 Nick Masset pitched the 10th inning for the Rockies. He was the Rockies 5th pitcher of the game. Nicasio pitched 6 innings giving up 6 runs, 9 hits, walking 1 striking out 2. He threw 99 pitches. so Masset sat the Padres down quickly and in order on 6 pitches.

Dale Thayer came into pitch for the Padres in the 10th and did not fare as well. After striking out Mr. Clutch Troy Tulowitzki. Cargo hit a single and Arenado flew out to left.

Justin Morneau came up with 2 outs and after going to a full count he hit the 6th pitch a 92 MPH fastball. 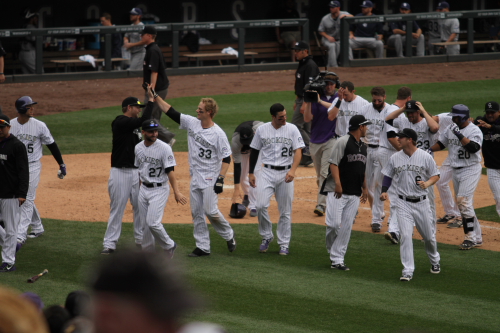 So that was it for this one, nothing beats a walk off home run.

The Rockies are now 25-20 this year in second place in the West 3 games behind the Giants who are at Coors for 3 this week. Let’s hope for the sweep!