I think you can figure out the affiliates

Appalachian League which is a Rookie League

This one is taking awhile to put together one I had a travel day and 2 it was a double header with twice as many photos and well twice as much of everything.

This being a Minor League doubleheader it is 2 games of 7 innings. So the game was schedules to start at 5P.M. and when I went to get my ticket at the ticket booth I asked what time will the game be staring and they said probably around 5:20 it was suppose to start at 5:00 but the Umpires are not her yet. This was at about 4:50!

So I headed in about 10 or 15 minutes later since it is a small grandstand stadium, there is not much to see and I have been her before this is actually the third time I have gone to a game at Burlington I went to 2 games there during my 2012 trip.

So like many Minor League parks they have something to show guys that played there that have made it to the Majors and these banners show some reason guys who have moved all the way up.

Many with the Royals and Well Will Myer with the Rays other notable players that played in Burlington are Jim Thome, Manny Ramirez, Bartolo Colon and C.C. Sabatthia. I learned this just from using the rest rooms at the stadium! 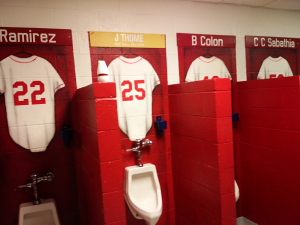 Always find this funny and always pee in Manny’s locker!

So it was time to Play Ball, after the umpires arrived of cause. 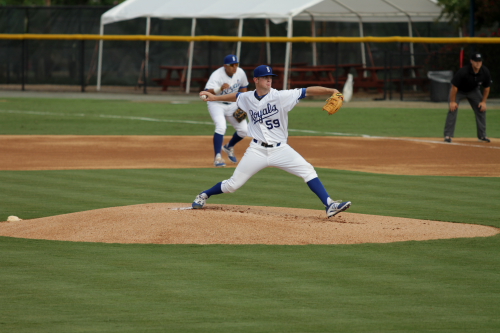 Carter Hope was the starting pitcher for the Royals this game only faced 3 Mets batters. 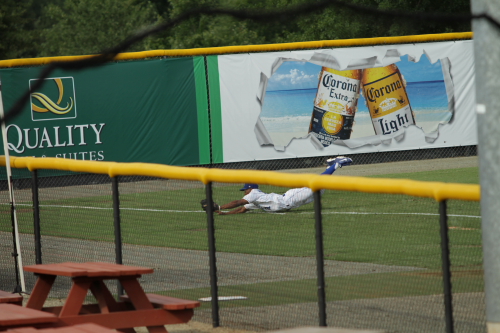 The first was a great catch by left fielder  Leland Clemmons hit by Luis Guillorme. 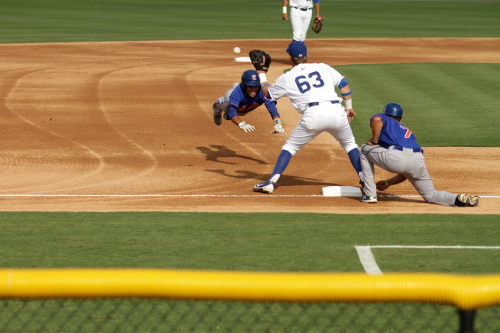 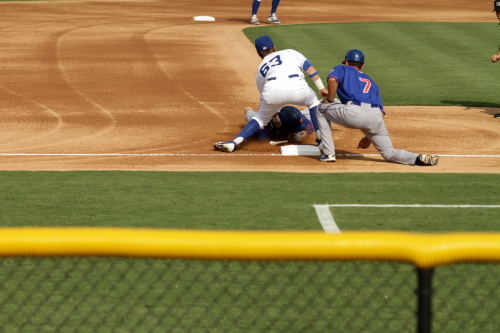 …for the out at third. 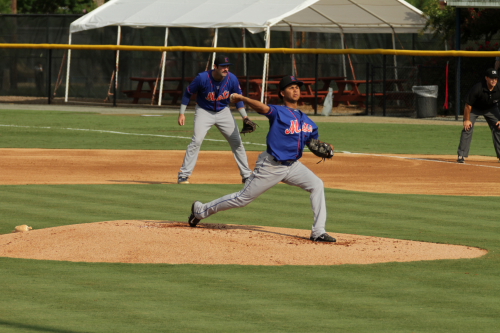 Yoryi Nuez started for the Mets, he started the game by hitting Leland Clemons. 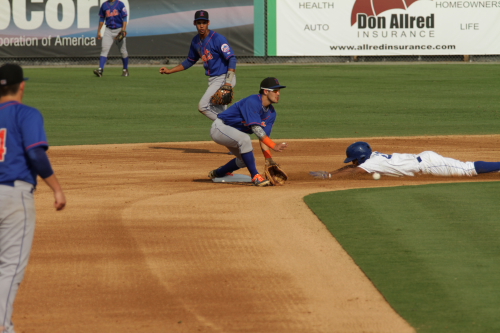 Clemons then stole second. The next 3 batters would get out and he did not score.

Pedro Perez the second batter of the 2nd inning for the Mets walked. Here he is on base while Hope is pitching to Wuilmer Becerra. Becerra would reach base on a error by the Royals short stop Jose Martinez. 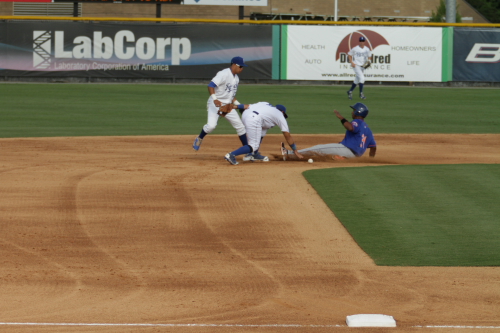 Perez sliding into second on the error. Hope would then walk Zach Mathieu to load the bases with 1 out. He then work his way out of the inning very nicely first Miguel Leal flew out to right field and then he struck out Ivan Wilson to end the inning with out the Mets scoring.

In the 3rd inning after being hit by a pitch Angelo Castellano steals second and the ball was missed by the Mets short stop  Leal.

Castellano easily made it to third. 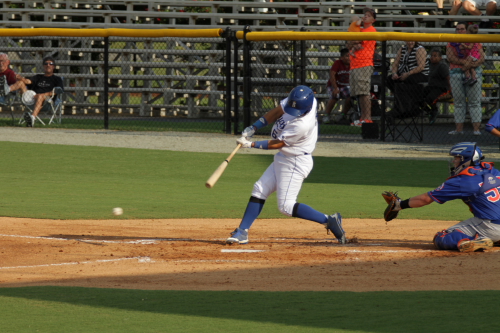 Jose Martinez hit a single to score Castellano to give the Royals a 1-0 lead in the third.

Martinez on first with Nuez on pitching, Martinez would advance to second on a wild pitch.

Between inning they had their version of the mascot race were their mascot Bingo races with 2 chick-fil-a cows and a kid and the kid wins!

The Royal scored a second run in the 4th inning Joshua Banuelos started the inning with being hit by a pitch. He would score on a  Ryan Dale single 3 batters later to give the Royals a 2-0 lead.

Amalani Fukofuka hit a single in the 5th and he is a  throw over to first. 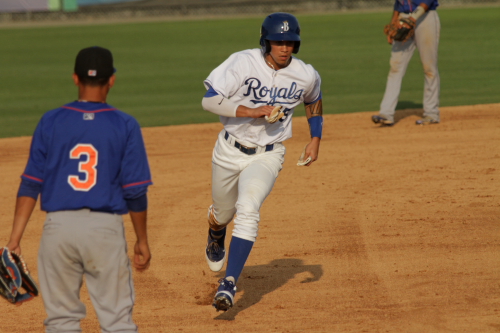 He would steal 2nd but be left on base. This is a photo of him running it out during a fly out to end the inning.

The Mets got things going in the 6th inning with 2 out first Mathieu walked and Leal singled. Ivan Wilson would hit a double down the 3rd. base line.

That would score Mathieu and Leal. 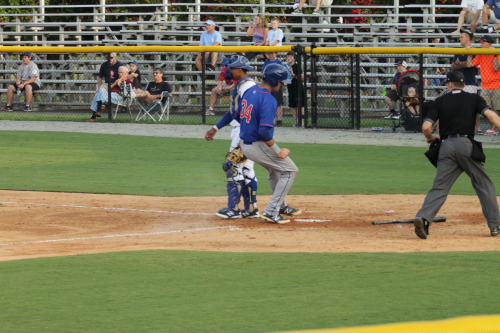 Mathieu crossing the plate for the first run and then Leal scored to tie the game at 2. 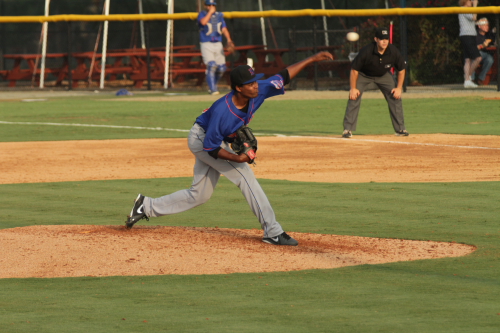 Pitched the 6th inning for the Mets he was the Mets 3rd pitcher of the game. Their starter Yoryi Nuez pitch 4 innings giving up 2 runs on 2 hits with striking out 3 and walking 1. Their second pitcher of the night was Ramon Esteves who pitched the 5th inning.

In the bottom of the 7th the Royals got a runner on base and Castellano layed down a sac bunt. Advancing D. J. Burt to second who came into pinch run for Ryan Dale. The Royals would not win this one since it was a 7 inning game with a walk off and we head into extra innings. 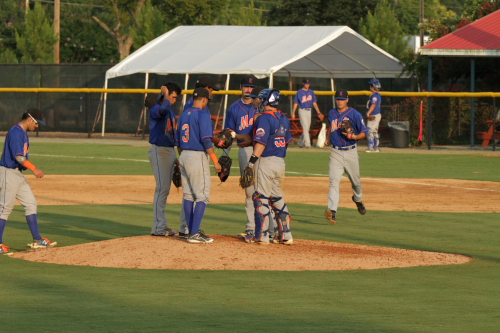 Bryce Beeler would come into pitch for the Mets in the 7th.

Beeler pitching to Leland Clemons, who he would strike out to end the inning. The game remained score less in the

Martinez stole second during Cleomons at bat he stole second then he stole third during Fukofukas at bat that was a wild pitch and he headed home. 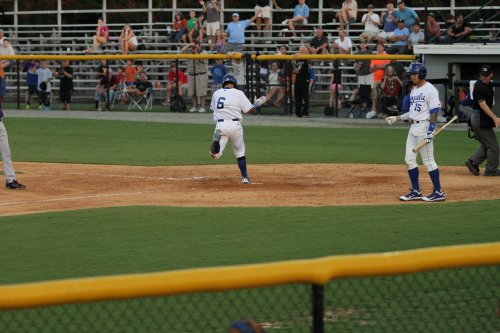 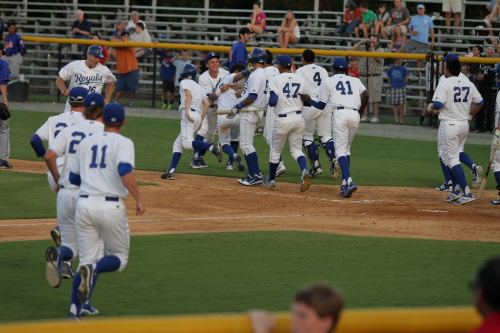 The Royals dugout cleared as they celebrated down the first base line. 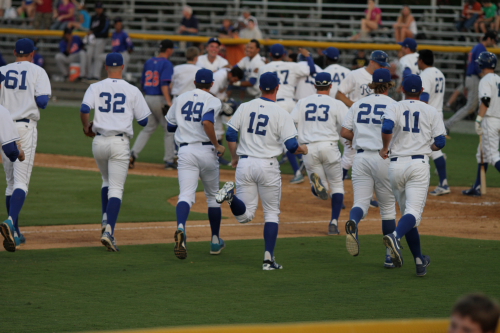 The Royals bullpen heading into celebrate with their team.

So that was it for the very long game one, considering this was suppose to be a 7 inning game and went 10.

There was still the second game.

The second game was a make up game for a rained out game last week in Kingsport. 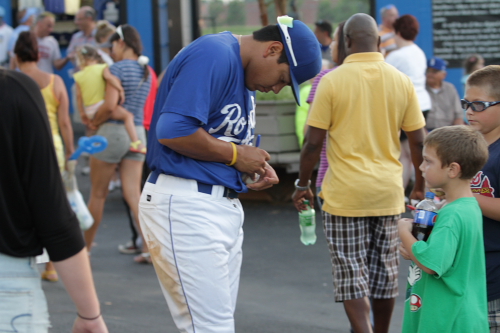 Between games a few players stopped and spoke to fans and gave autographs.

To change it up a little I sat on the 1st base line for this game.

Chase Darhower started the second game for the Royals. He sat the Mets down in order getting all 3 batters to fly out.

Andrew Church started for the Mets. After getting the first 2 Mets out he hit the Royals 3rd batter of the inning with a pitch and got out of the inning on the next batter. 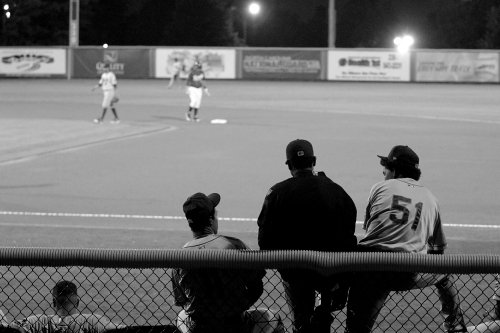 The Mets bull pen looks on during the first inning and the creative BNW for this way to long of a post. 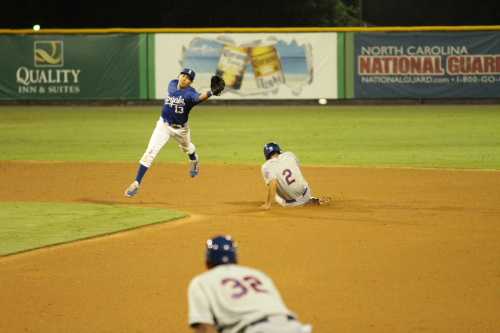 After getting on base with a single Wuilmer Becerra stole second with 2 outs and made it to third because f a throwing error by the catcher. 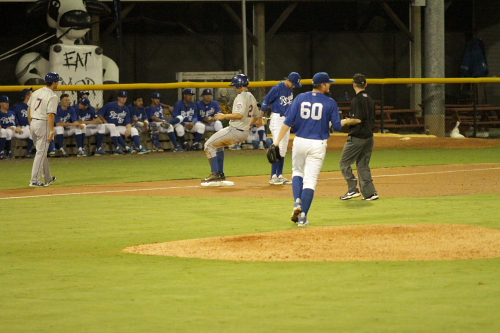 He easily made it to third. He did not score and was left on base.

Cristian Cano started the 2nd for the Royals with a 1 out double.

Cano would advance to third on a throwing error from  Branden Kaupe.

Riley King hit the ball and would get on first.

Cano tagged out at home on a Luis Lara hit.
Angelo Castellano would hit a single to load the bases.

Manny Olloque scored on a Logan Moon single to give the Royals a 1-0 lead.

…but was tagged out at the plate.
The Royals had a huge inning in the 3rd. To make this simple they scored 6 runs on 5 hits in the inning. Jose Martinez lead the inning off with a double, Chase Vallot walked Martinez scored on a Banuelos single. Vallot scored on a Cano single.

Here is Banuelos scoring as the ball heads towards the wall when the catcher missed it. King scored and the Royals had a 5-0 lead Cano would than score on a Lara single to give the Royals a 6-0 lead. 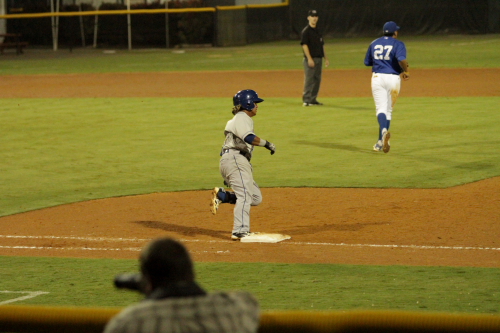 The Mets got on the board in the 5th with a Branden Kaupe triple. Here he is turning at 1st. 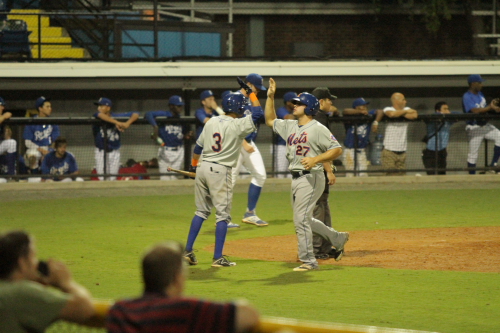 The Royals would score a 7th run in the 6th inning after Castallaano hit a reached base on a fielders choice getting Lara out at home, he stole second and scored on a Martinez single a few batters later. The Royals had a bunch of base runners this inning but was only able to get 1 run. The last 2 batters flew out stranding 2 runners.

Andres Muchado pitched the 7th inning for the Royals and he was the 3rd pitcher for them this game. The starter Chase Darhower went 5 innings giving up the 2 runs on 3 hits walking 2 and striking out 3. Their secon pitcher Antonio Cruz pitched the 6th and struck out 2.
Since this was a double header they only played 7 innings and this game was over with the Royal winning 7-2.

The Royal celebrate their second win of the day!

Once again the games were exciting in Burlington they always seem to be when I go and see games here. Last time I saw a no-no go till the 9th inning with 2 outs and a full count before the pitcher gave up a homer  for the only hit of the game and this semi marathon double header. This is a really fun stadium to catch a game you are close to the action and it always seems like there is a lot of it.
So that is it for this one, I have a few days off before my next game in Charlotte to check out their new stadium downtown.