My 2nd game of series

I did not really get to many photos of the out side of the stadium the first game, so today I got to the stadium slightly earlier to do some of that. I also had to wait for Jared because he had tickets at will call. he was also doing a trip and was in Chicago for 2 games of that series.

They had these tigers with baseballs in their mouths all around the stadium.

They also had the street light banners like many stadiums do. I was more impressed that this city had street lamps and electricity!

They had some cool details around the stadium like these tile baseballs. 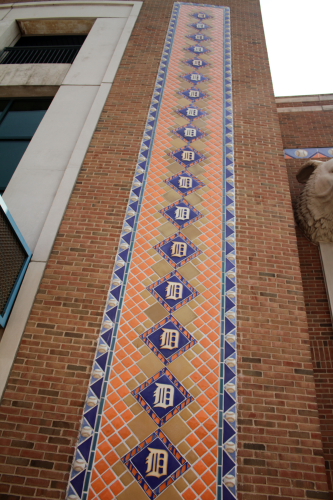 These tile logos around an entrance were pretty cool also.

Jared arrive I got my ticket and we headed into the stadium another feature the stadium has is a carousel with all the animals being tigers.

After a few rides on the carousel  we headed over by the wall to see if we could get some autographs. I had to pry Jared off the thing after some minor crying and slightly wetting his pants he gave in!!!!!! O.K. that didn’t happen.

Walt Weiss had a catch with one of his son’s in the dugout. I thought that was pretty cool. I was also a little jealous that these kids get to travel with their parents and do all this including shag baseballs in the outfield during batting practice and just are able to experience these things. Like playing catch with your dad in a dugout of a major league stadium.

Brett Anderson and Tyler Matzek both stopped and signed after they did their throwing.

The seats at this stadium had these really cool tigers on the ends. I always think this is a really cool detail that people over look at a lot of the stadiums. Most do have some really unique stuff.

Matt Belilse stands and waits for the colors to leave the field, only one thing there was no color guard today! it is cool that he gives that moment before the games anyway.

Anibal Sanchez started for the Tigers.

Josh Rutledge makes contact during his 1st. inning at bat.

He grounded out to short for the second out of the inning.

After the first inning we headed up to our seats.

When I got to the upper concourse I took in the sights of the city of Detroit! I know why the stadium the direction it does. Everything in the opposite direction is abandoned and/or crumbling.

Here is an example of why nobody has said the word “Detroit sure is beautiful this time of year”! The stadium is really nice but it seems like a mirage in the desert of disconcert surrounding area.

After those photos it was time to get creative, so here is a creative BNW to show off the made photo skillz! 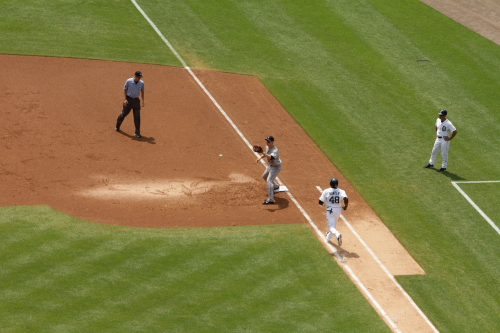 Talking about disconcert back to the Rockies game! Tori Hunter grounded out to start off the 2nd for the Tigers.

Here is a look at downtown from the upper deck. 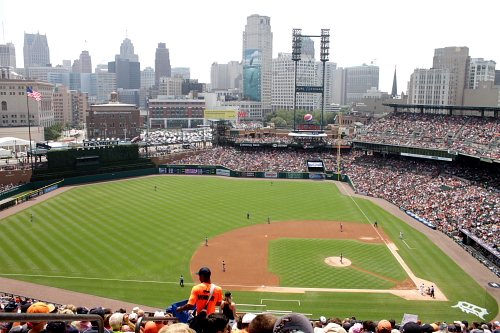 You can’t tell that everything in the other direction is almost ready to be demolished.

Jorge Pitching to J.D. Matinez in the 2nd.

The Rockies did not do much in the top of the 3rd. they did manage to get their first hit a single by Brandon Barnes. 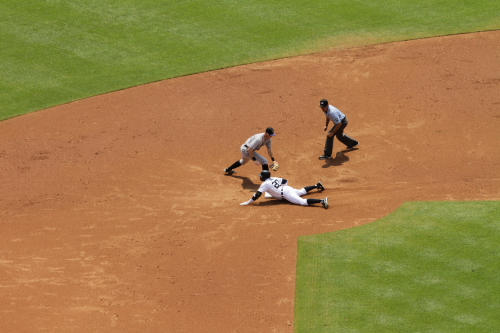 Jorge did get the first 2 batters out in the bottom of the 3rd. and then the Rally began, Rahj Davis started off with a double. Ian Kinsler was than hit by a pitch. 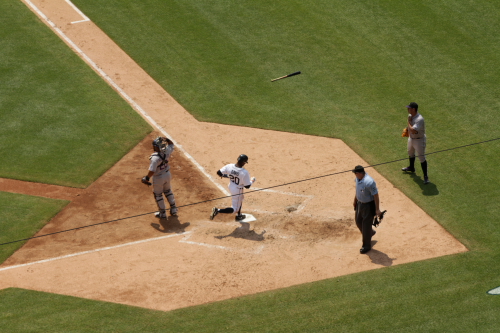 Miguel Cabrera hit a single that scored Davis and the Tigers took a 1-0 lead. 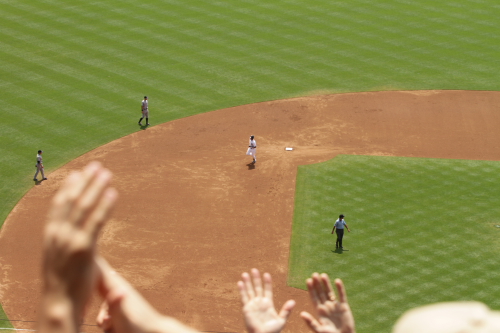 Jorge did strike out Hunter for the 3rd. out of the inning and it was time for the Chevy race which is way cooler and not as creepy as the random dental product race at Coors.

Not much happened in this game till the 7th. when Jorge was taken out of the game by Walt Weiss. The Tigers did get 2 hits in the 5th but no runs came from it. the Rockies only had the 1 hit till Drew Stubbs hit a single in the 7th. Jorge went 6.2 innings and really did not pitch that bad he did strike out 6 and gave up the 4 runs in the 3rd. The 1 walk he allowed did hurt him with the Martinez home run but the 3rd run did not really matter. 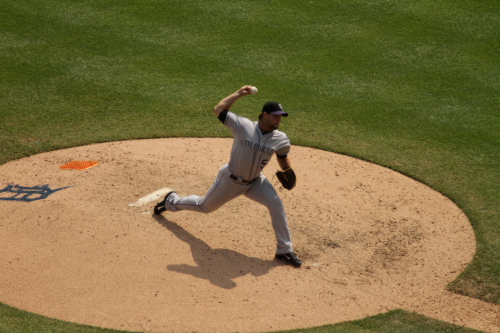 Tommy Kahnle came into pitch for the Rockies. 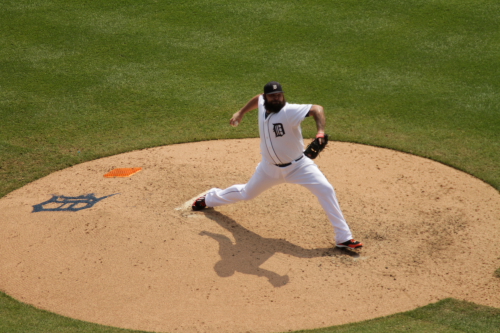 Joba Chamberlain came  in to pitch for the Tigers in the 8th. Sanchez pitched 7 complete innings only giving up 2 hits striking out 12 batters. 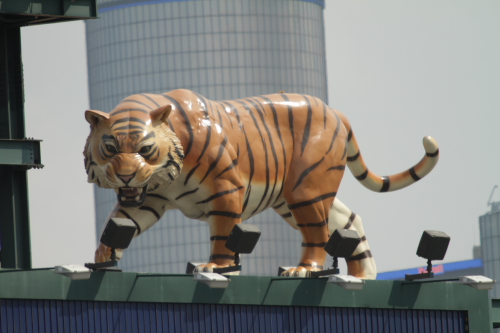 The Tigers above the score board was as fear looking as Sanchez’s pitching! Thought these were pretty cool.

Adam Ottavino pitched the 8th inning for the Rockies.

Drew Stubbs hit the ball to center for the last out of the game.

Rahj Davis makes the catch and the Tigers win this game and swept the Rockies. The start by Jorge was not to bad, the 3rd inning was his only bad inning. He did have runners on in most innings but worked his way out of it. The pitching did keep the Rockies in the game but there was absolutely no bats against Sanchez. The Rockies scrapped out 4 hits only 2 off Sanchez and 1 of each of the Tigers relievers.

So that is it from Detroit I have made the turn back west and still have a few games left before going back to Denver 1 in Indianapolis and 2 others.