The Stormchasers are the triple A affiliate of the Kansas City Royals.

This is my first game of the year down in the Springs.

After turning around twice once because I came to the conclusion that shorts was not a great idea and that I needed a jacket and the second because I forgot the jacket. I was finally on my way to the Springs for the first game down there this year. Like always I got down there about 2 hours before the start of the game I leave Denver early one so I don’t hit traffic 2 is to go see if I can find baseballs or as we like to call them Easter eggs, basically it is just searching for baseballs outside the stadium. There was no batting practice today and the tarp was still on the field, so I thought I may not find any but you never know. So I walked around the fields outfield walls and did not find any I than decided to walk along the stream that runs behind the stadium and found the first Easter egg of the day and the year. 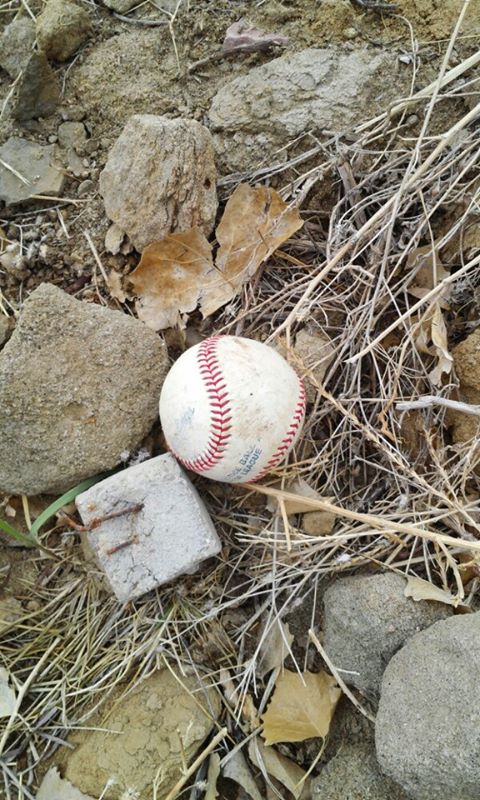 It was  about 2 feet up on the bank of the stream. I actually walked past it the first time past, which happens often while searching out there. The tarp was on the field when I got there. There was no batting practice so no chance of getting any others hit out. So I went and sat in my truck before getting my tickets and head into the stadium. I immediately headed down to the first baseline for autographs. I needed a few Sky Sox on my Rockies photo I have been working on since they were with the Rockies at the beginning of the season. I got Tyler Chatwood and Ryan Wheeler were 2 of the 4 I needed. I also got a few cards signed by Tim Wheeler, Drew Pomeranz and Tyler Colvin. I also brought my 2010 Rockies team ball with hopes of getting Aaron Cook, but he was on the disabled list and was not there. I did get Manny Corpas who I also needed on the ball . Another person I needed on my photo was Chris Volstad who was the starting pitcher for the Sky Sox. 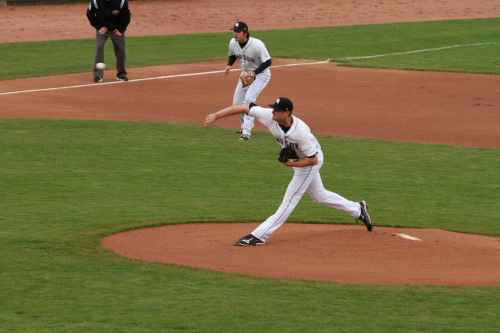 The first pitch by Volstad was a strike to Fulu.

The last out and 8th batter of the first inning for the Stormchasers was Ex-Rockie and Sky Sock Willy Taveras.

He would ground out to Short Stop Tommy Manzella.

Manzella throwing to Ben Paulson at first for the out.

Nate Adcock was the starting pitcher for the Stormchasers.

He walked Cory Dickerson and Dickerson got into his HEAD! HEEE”SS IN YOOOO HHHEEEAAADDD!!!!

D.J. Lemahieu hit a ball to the Stormchasers short stop who had a little trouble with a bounce. 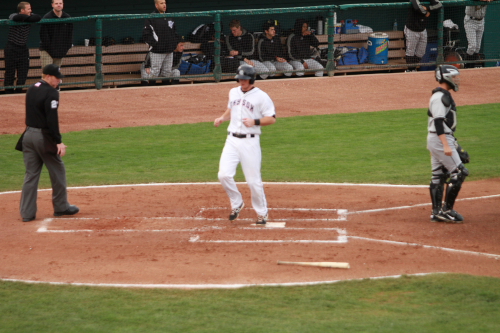 Dickerson and Lemahieu would both score to tie the game. 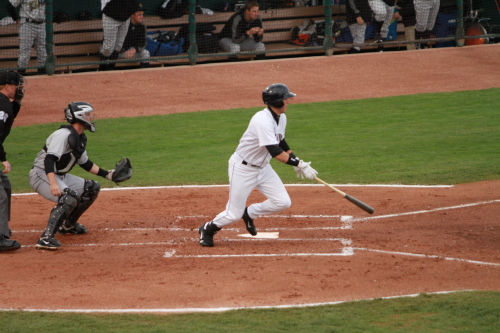 Tyler Colvin ended the inning grounding out to the short stop who got Ben Paulson out at second. No relevance just tried to get Tyco into the post!

Here is a random shot of a bunch of players in the dugout.

Somewhere around the second inning Amy, Jared and Rachel showed up. I did not take to many photos for a few innings. The Stormchasers got 2 runs in the 3rd both were home runs the first hit by Giavotella and the second by Chad Tracy. Tracy was also a former Sky Sox player. The Sky Sox responded with 3 runs of their own the first a home run by Matt Mcbride. Ben Paulson who hit a double would score and so would Tyler Colvin who walked to get on base. Another home run was hit by the Stormchasers Max Ramirez in the 5th inning. In the 6th Corey Dickerson hit a solo shot of his own.

Manny Corpas came into the game for the Sky Sox in the 6th inning. Replacing Volstad who went 5 innings giving up 5 runs, 9 hits including 3 home runs. he did strike out and walked 2. Corpas pitched 3 inning striking out 3 and not giving up any runs or hits. The only 2 base runner were an error at short hit by Fulu in the 6th and  a walk to Chad Tracy 8th. 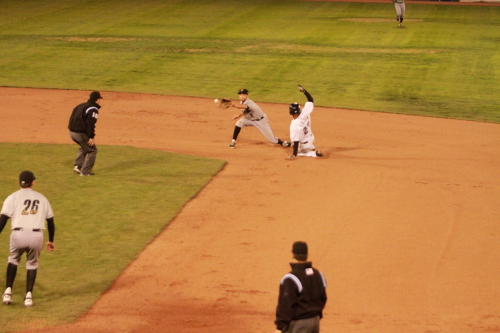 Gregg Golson steals 2nd in the 7th inning after he was walked by the Stormcahasers Evan Teaford. Teaford only lasted 2/3 of an inning. He replaced Adcock who pitched 6 innings and gave up 6 runs, 10 hits, striking out 3 and giving up 2 home runs to the Sky Sox. 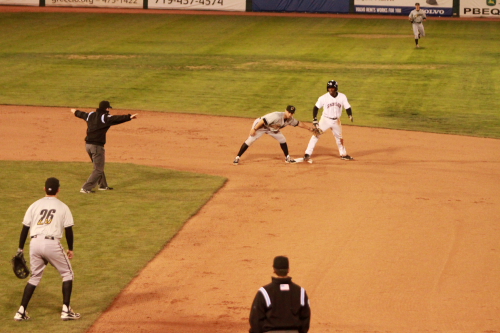 Golson was safe at second. The score was 6-5 Sky Sox at this point. The Sky Sox scored 3 more runs in the 8th on Matt Mcbrides 2nd home run of the night, he had a great night going 3 for 5 with 2 home runs and a single. They went on to win 9-5. after the game we hung around for a little while to see if we could get some more autographs and I ended up getting the other 2 Sky Sox players I needed on my Rockies photo Rob Scahill and Chris Volstad. I also got a few cards signed by Volstad.

A few other guys including D.J. Lemahieu stopped, but I did not have anything for most of them. Amy did get a photo I took of D.J. last year signed from a double play last year. It was a ball hit by Matt Kemp and that is Mark Ellis sliding into second. He said that was actually his favorite play he made last year.

The Sky Sox are now 23-14 and in first place by a half game in the Pacific Coast North Division.

See you at Coors!