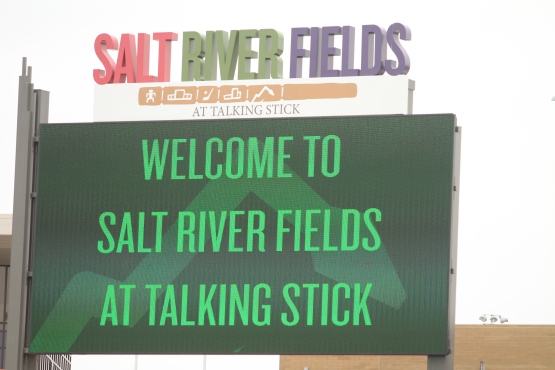 This day like most started early. We headed down to Salt River Fields for some BP. We started on the Diamondbacks side for there Major League Batting Practice. Where I got 3 Bp baseballs 2 rollers and final my first catch of the year, for a total of three. Than Don, Dan and myself headed over to the Minor league fields also on the D’backs side for minor league BP and I got 10 more mostly rollers or pick ups and a few Easter eggs!

So we than headed over to the batting cages because the Rockies did a BP in there instead of on a field. So we just watched from above. 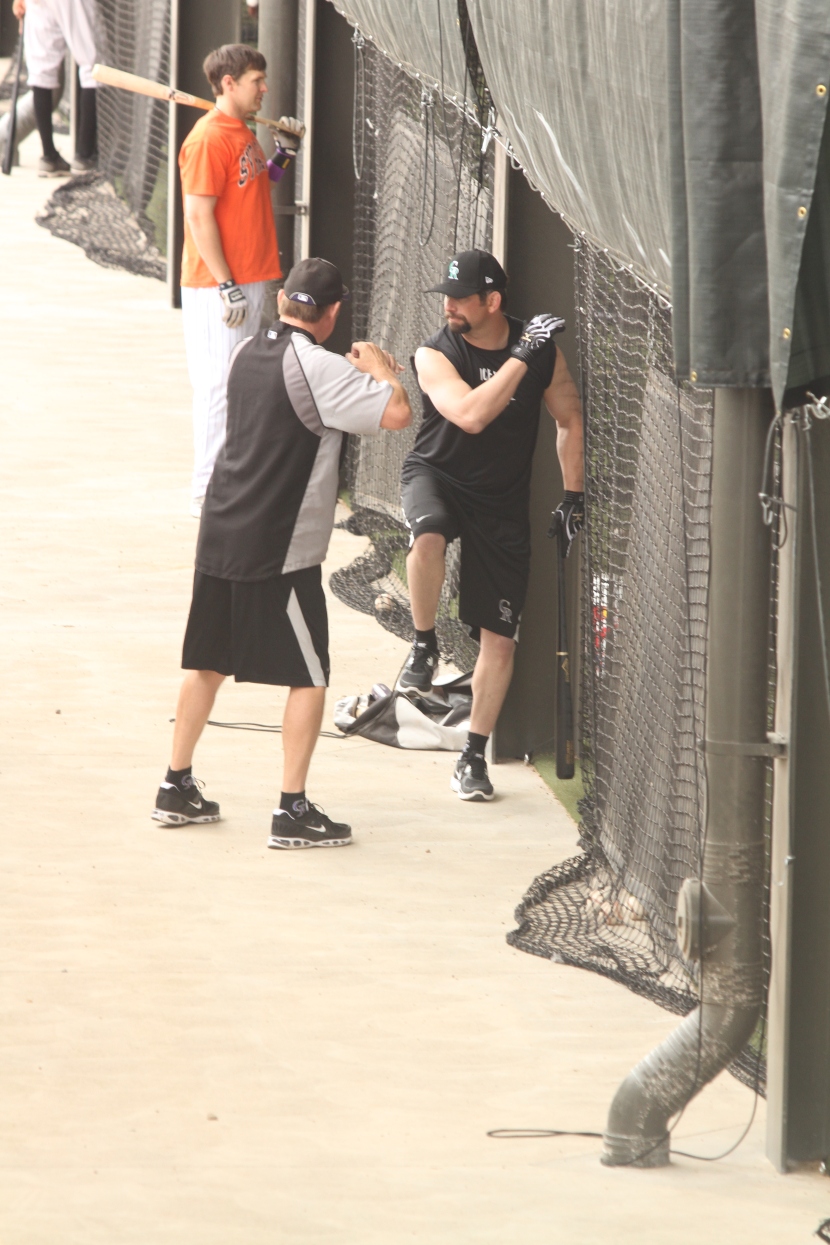 Here’s Todd Helton Challenging hitting Coach Carney Lansford to a fight clearly Todd got the Karate Chop ready and Carney looks read to slide a jab or they are just going over his swing of the bat! I like my version better

Nolan Arenado in the cage. This area of the complex always reminds me of a zoo.

Johnny Herrera looks on as Ramon Hernandez. Take a swing. 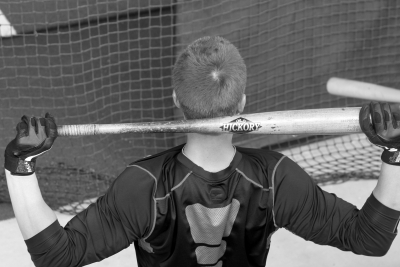 Jordan Pacheco waits for his turn in the cage and the creative BNW for this post to show off the mad photo Skillz.

Casey Blake loosing up before hitting the cage. He has not been in-game this spring due to an injury.

So after hangin there for a while we headed into the stadium.

This is new guy Marco Scutaro who the Rox got from the Red Sox in the off-season.

He most likely will be at 2nd base. But there is depth at the position with Johnny Herrera and D.J LeMahieu. Who as I was writing this was sent to Minor League camp. But I think we may still see him in Coors soon. 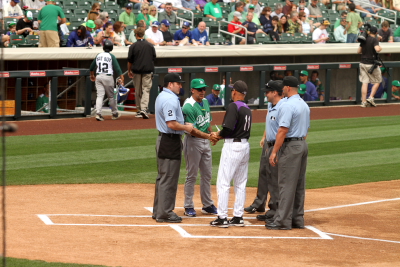 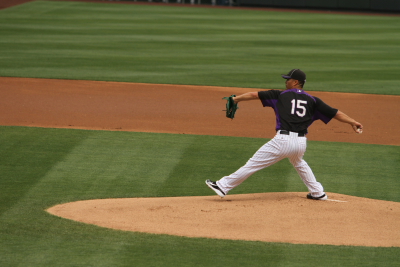 Guthrie faced 4 batters in the inning only giving up a double to Andre Either. 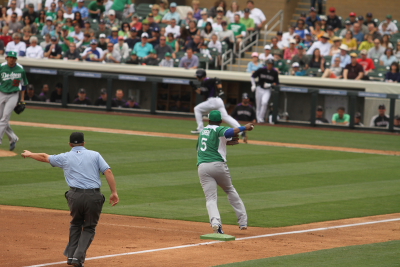 Juan Uribe throws to first to get Marco Scutaro out at 1st. for the second out of the inning.

Former Rockie Mark Ellis throwing to first to get Guthrie out in the 4th. The Dodgers scored one in the fourth when Tony Gwynn Jr. hit a single to get Eithier home. (1-0) Dodgers 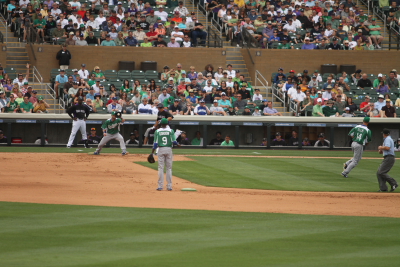 the catch from Ellis’ throw.

The Rockie would respond with 2 of their own in the 4th. Guthie’s out scored Chris Nelson and Eric Young Jr. hit scored Andrew Brown (2-1) Rox 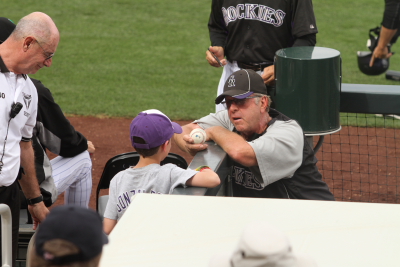 Rene Lacheman gives a baseball to a kid the way only Renee can with his spiel.

Willin Rossario legs out a single in the 6th.

Also in the 6th during I believe Rosario’s at bat I caught a foul ball and gave it to Mary O, who is an usher at Salt River Fields and Coors. It was her birthday. Happy Birthday Mary. It was the first game ball I got in a Major League game. 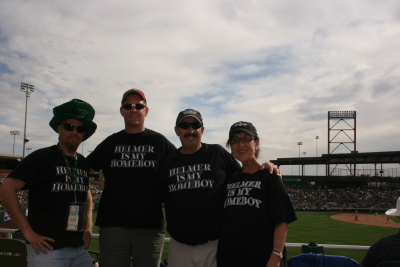 During the Network not to be named pre game show we were shout to bring back Helmer and we want Helmer.

As you see in this picture I am wearing my St. Patty’s Day green hat. Which this guy stole from me for a few minutes before the game.

The Rockie mischievous mascot Dinger he could not get it on his head so he hung it on his nose. 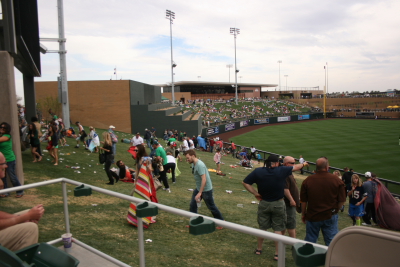 Than the bee’s came and they evacuated the left center part of the berm.

Here is the mostly cleared berm from right field.

The Dodgers scored a run in the 8th inning the Rockies scored 2. (5-2) Rox

Rockies closer Rafael Betancourt came in for the 9th and got lit up by the Dodgers letting up 4 runs before the end of the inning.

Than in the 9th Tim Wheeler stepped to the plate with 2 outs and the game tied at 6 and launched a 2 run HR to the berm in right field for a Rockies walk off win. (8-6) the final. Right before this homer we were talking about how he is a clutch player and he proved the conversation right.

Once again thanks for checkin out the Rox addict blog.

We stil have about 5 games left at Spring training and I am still a game behind on posting so check back.

From Scottsdale I am the Rox Addict and I will see you around Phoenix.