The Rockies have lost 16 sunday games in a row this streak goes back to April 17.

Going into this Sunday it was only 15 Sundays in a row.

This Sunday like every sunday home game at Coors was autograph Sunday today. Ryan Spilbourghs, Eliezer Alfonso, Jason Hammel and Charlie Blackmon signed. I first went to Spilbourghs line and had him sign a baseball Card, then headed to Hammels line sign a 2011 Topps card. I had Alfonso sign my mini helmet that I have been getting signed by players I don’t have anything else to sign. So far I have 9 autos on it.

After the official autograph session was over I headed over to the right field wall where Rex Brothers was signing. I had him sign a Sky Sox program I got last month. He thought it was cool and had not seen it yet. Since I have a few copies I told him I would bring him a copy.

Esmil Roger also signed and he signed 2 cards for me.

The players then went in and I wandered around the stadium giving a few and “X” and I gave the extra Cargo figurines we got to the deserving friends at Coors. You know who you are and thanks for everything you guys do for us.

The players then came out for warm ups. This is a photo of Nations starter John Lannon heading to the dugout with catcher Jesus Flores.You may be asking where Ivan Rodriguez is, he is on the DL with an oblique strain.

Aaron Cook leads the Rockies to the field for the start of the game.

Aaron Cook Throwing the first pitch to the Nationals Rick Ankiel who he would walk. Cook is 2-6 this season, going into this game.

The next three Nationals batters would get out. Including  Ryan Zimmerman striking out.

The Rockies would send five to the plate in the 1st. Eric Young Jr. Grounded out, Dexter Fowler walked. Carlos Gonzalez flew out The Deuce hit a single and Wiggington grounded out to end the inning.

The Nationals would score in the 2nd on a Jonny Gomes HR after Jayson Werth walked to lead off the inning. (2-0) Nationals.

The Rockies did not score in the second Cook would pitch real well in the 3rd only letting up a run to Ryan Zimmerman.

Eric Young Jr. would lead off the 3rd inning for the Rockies with a bunt.

He would then get doubled up on a Fowler hit to the Nationals shortstop Ian Desmond.

Aaron cook would pitch into the 7th inning. He pitched very well this game  unfortunately did not get the run support. Cook threw 79 pitches, Struck out 5 Nationals and let up 2 runs  Matt Reynolds came in to the game and completed the inning striking out Ankiel. 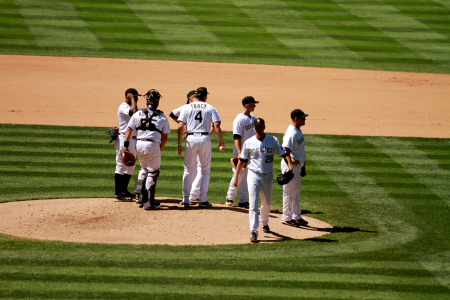 Aaron Cook heading to the dugout in the 7th inning.

The Nationals would take out there starter Lannon also in the 7th.

The Rockies would finally get some runs in the 7th. Herrera would pitch hit in the pitchers spot and later score on a Young single. Young would score the second run to tie the game at 2.

Herrera score the Rockies first run in the 7th.

The Nationals would score the go ahead run in the 8th. Danny Espinosa lead off the inning and scored the Nationals 3rd. run on a Werth single. That would be the final score 3-2. for the 16th Sunday loss of the season for the Rockies good thing they don’t play tradition Sunday double-header like they use to.

So that is it for this game this week heading to the Spring for Jason Giambi’s rehab and then the Rockies return against the Marlins on Monday.

Also Good news came that Juan Nicasio has been releast from the hospital.

The Rockpile Ranter is running a photo contest. If you would like to enter check out his blog:http://baseballsnatcher.mlblogs.com/