my 10th and 11th game of the season it was a split double-header.

After snow and cold temps it was time for colder temps and baseball.

This was the coldest double-header in MLB History and the first game was the Coldest first pitch in MLB history.

Yes, that is the temp right after Jeff Francis’ first pitch to Andrelton Simmons. 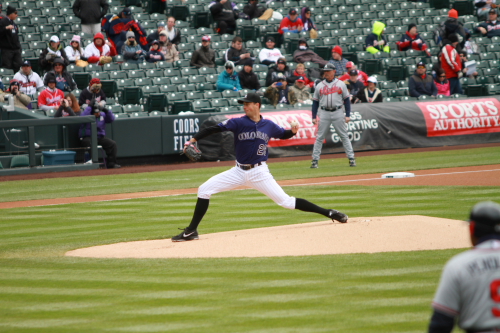 So for game one Jeff Francis was the starting pitcher for the Rockies this was by far not his best game. His first inning wasn’t bad beside the Juston Upton solo home run. He only faced 4 batters getting the Braves lead off batter Andrelton Simmons to pop out to Wilin Rosario and B.J. Upton to ground out to Chris Nelson at third base. Freddie Freeman flew out to Michael Cuddyer in right field. He got out of the inning with 19 pitches a little high for an inning but not horrible.

Mike Minor was the starting pitcher for the Braves got all 3 Rockies he faced out in this inning. He got out of the inning throwing 8 pitches now that is really good. 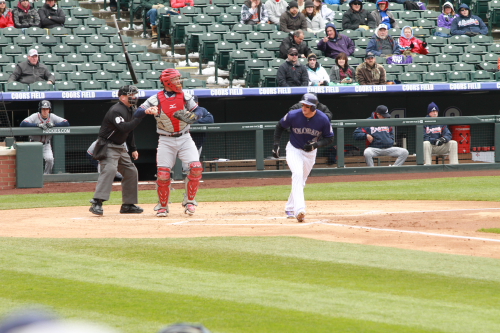 In the 2nd inning he did walk lead off batter Troy Tulowitzki. He scored from third on a Wil Rosario single. He moved to third on a Michael Cuddyer double. 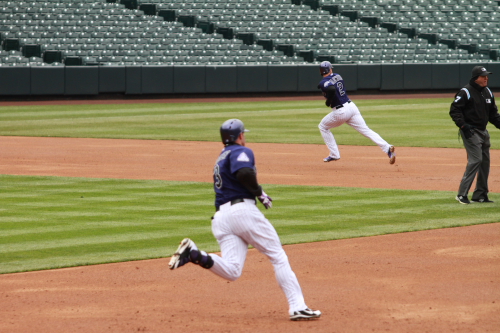 Michael Cuddyer running to second as Tulo runs to third. 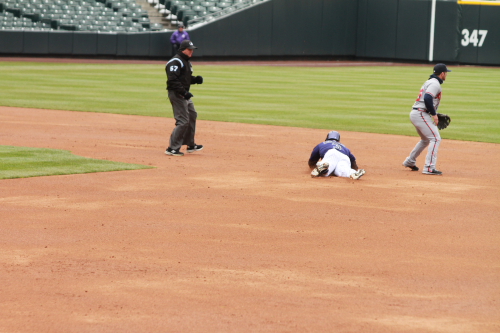 Wilin Rosario hitting his single to score Tulo from third base.

The Braves would score 2 in the 2nd inning on a Dan Uggla home run. 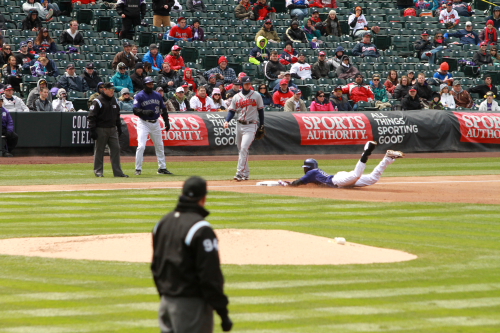 Dexter Fowler tried to get things going in the 3rd inning. with a lead off triple. Josh Rutledge scored Dex to once again tie the game at 3. Cargo struck out and Tulo flew out to shallow center and Rutledge did not score there is another lost RBI and opportunity for Tulo. That is approx. 10 runs that were not scored with runner in scoring position during his at bats. 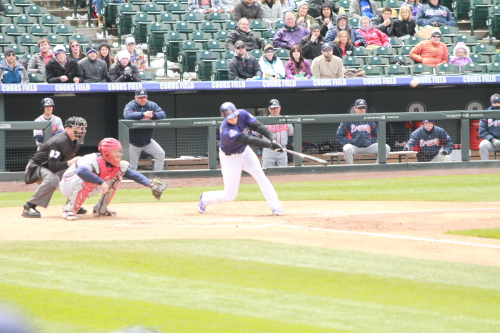 Tulo swinging at the pitch that he hit to center for the out. 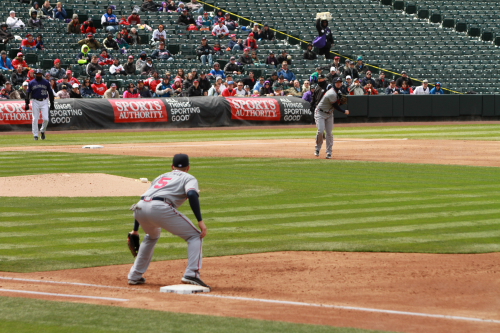 Rosario grounds out to Braves third baseman Chris Johnson who through to Freddie Freeman at first to end the inning.

Rob Scahill came into pitch in the 5th inning for the Rockies. He pitched really well he got out of the inning throwing only 5 pitches in the inning. That was to the middle of the Braves line up starting with Justin Upton then getting Freddie Freeman and Chris Johnson out. Scahill pitched 3 inning throwing a total of 29 pitches now that is really good pitching. He faced a total of 10 batters striking out 2 and only allowing 1 hit a single to Freeman.

Before leaving the game Francis did let up a 4th run a home run to Evan Gattis. (4-3) Rockies.

Not much happened at the rest of the game it was cold it warmed up to about 28 degrees by the end of the game.

With a 4-3 lead the Braves brought out there very affective and intense closer Cole Kimbrell. He started the inning by striking out Michael Cuddyer, Rosario hit a single, Jordan Pacheco also struck out and while Chris Nelson was batting Rosario was thrown out in a very questionable play. He was stealing second base. The question is was it a not so well executed hit and run or was it a steel attempt. This was the third out of the inning and ended the game. The Rockies lost this one and the Braves now have the best record in baseball. So it was time to empty the stadium. We had about an hour and a half to wait for the opening of the gates for the second game of this split double-header. The first game I was the only one of the our regular group to be at the game. Carlos was there for an inning or 2 and Robert was in his post in the pavilions. In total there were only about 1000 fans at this game.

The start of this game was 30 degrees.

Slightly warmer from game one but not much better.

John Garland was the starting pitcher for the Rockies.

Julio Teheran started for the Braves.

Gonna keep this short and sweet it was cold, I did not take many photos the Rockies lost this one also. The Rockies took a 1 run lead in the 3rd the Braves answered with 3 in the 4th.

Here is Eric Young Jr. scoring that run in the 3rd.

Josh Outman came in to pitch the 7th. He recently got called back up from The Springs! He was killing it in the Springs pitching in 5 games 10.2 innings with a 0.84ERA. He pitched 2 very good inning this game also striking out 3 and only pitching to 6 batters. 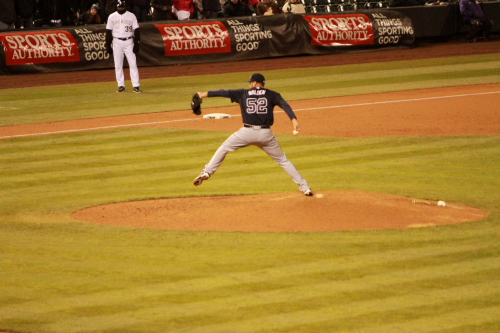 Jordan Walden came in to pitch for the Braves in the 9th. Cory Gearin pitched the 8th for them. Julio Teheran pitched 7 inning and only allowed the 1 run on 8 hits and struck out 3.

The Rockies went into the bottom of the 9th down 10-1. the Braves scored 4 in the top half of the inning . Josh Outman allowed  got touched up in the 9th inning allowing 4 runs. Some of those were after Wilton Lopez came in to pitch, but were runners that Outman had put on base. Wilton did not get as shelled as in Sundays game but something does need to be done with his inconsistency.

The Rockies made an effort to get back into the game but were only able to get 1 run in the inning. they had a mini 2 out Rally but it was way to little to late. This was there 3rd straight home loss after starting the season with 8 consecutive wins to start the season. The final in this one was 10-2. The temp at the end of this game was 27 degrees. It was not to bad till about the 7th inning and then I got to the point of I can’t handle the cold. Despite the loss and the cold it was a fun night hangin with the crew at Coors.

Well that is it for these two games got another one to post about from the exciting Thursday day game.

This Post was brought to you by Jackson of Lodo without getting warm and eating there between games I would have never made it through the second game!!!!!