My 7th Coors Game of the year.

After Heading in I headed towards the pavilions for batting practice and did not get any baseballs. The Rockies had an OK BP and the Phillies was very uneventful. After I went to the wall on the first base side and was able to get Drew Stubs on my team project. Which leaves me with only 8 more guys I need on it including 2 coaches Eric Young and Blake Doyle. 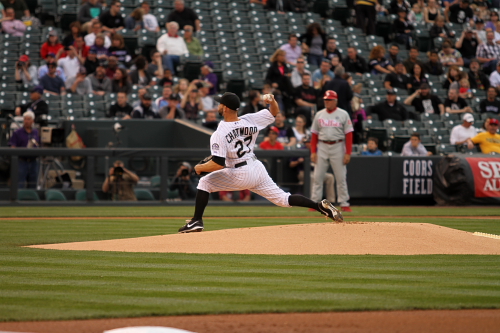 Tyler Chatwood was the staring pitcher for the Rockies he pitched very well in the first he had Ben Revere ground out to start the game and then walked Jimmy Rollins. Chase Utley the only player to hit a fly ball off Chatwood to the outfield  the whole time he pitched. Ryan Howard also grounded out and the inning was over.

Eric Young came out for the bottom of the 1st. and did he usual high five down the line.

Jonathan Pettibone was the starter for the Phillies. 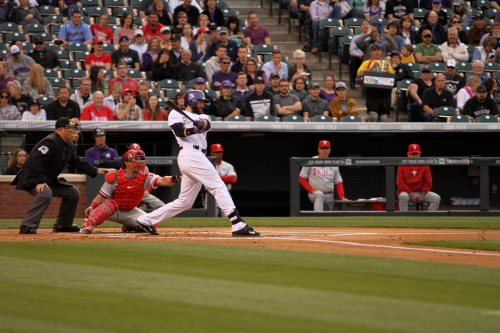 It did not take long for the Rockies to get to him once again Charlie (Chuck Naszty) Blackmon kept it Nazty with a lead off single he started the game with a .411 batting average and raised he average to .426 by the end of the game.

Drew Stubbs then hit a single, Carlos Gonzalez hit a very hard line drive to Utley at second for the first out of the inning.

After Tulo took a 14 pitch at bat and walked Justin Morneau hit a GRDB to left to score Blackmon and Stubbs for a 2-0 lead. 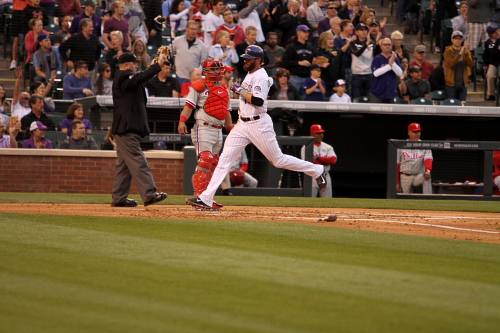 Wilin Rosario would ground out but score Tulo from third. Nolan Arenado hit a single scoring Morneau and the Rockies had a 4-0 lead.

Tyler Chatwood Struck out both Marlon Byrd and Dominic Brown in the second followed by a ground out to Arenado at third for a very quick inning throwing only 11 pitches. 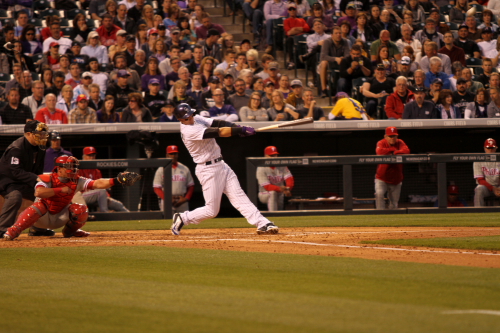 The Rockies offense stepped to the plate in the bottom of the 2nd with a 4-0 lead and once again Blackmon hit a single and Cargo would score and then Troy Tulowitzki did what he does best hits a homer with a already big lead! It is great that we got tacos in only the second inning but we were up by 4. I would like to see him hit the 3 run homer when we are down by 2 in the 8th or 9th to give the team the lead after being behind. He always performs best when we already have the lead and rarely in the clutch when hits and runs are needed. So TYPICAL TULO!

In another quick inning Chatwood got all three Phillies batters too ground out throwing only 9 pitches. The Rox did not score in the 3rd, but Tulo hit a double to score the Rockies 8th run of the game. Once again TYPICAL  TULO. Now it has always been this way with him adds runs to already big leads. He does always have the numbers but it when he gets the numbers that drives me crazy. he also hit a single in the 6th that scored the Rockies 9th run of the game so he did go 3 for 3 with a walk and 5 RBI’s but all 5 were with a lead of 4 or more.

The Phillies did get to Chatwood slightly in the 6th, after we started to notice he had a No- No going. With 2 outs in the 5th and it looking like he would have another great inning Carlos Ruiz hit a ball to Arenado at third that he either kicked or just missed with his glove and hit him for a error and only the 2nd runner for the Phillies of the game. Ruiz then scored on a Jason Nix single and the Rockies had a 9-1 lead.

Former Rocky and current Phillies Jeff Manship came into start the 7th inning for the Phillies. He was the 4th pitcher for the Phillies at this point after getting the first 2 batters Rosario and Arenado out D.J. LeMahieu hit a single and Manship was taken out of the game. D.J. would later score the 10th run of the game for the Rockies, he scored on a Blackmon single.

Blackmon went 3 for 5 with an RBI and scored twice, he now has a .426 batting average 3 weeks into the season is very good with 61 at bats. 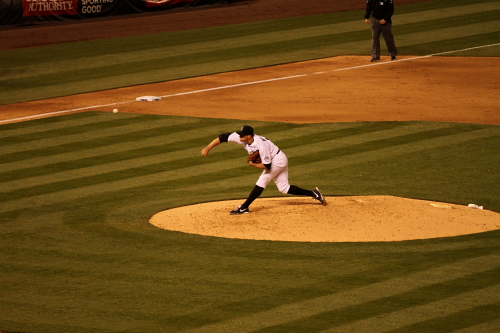 After Chatwood was taken out of the game after 7 Chad Bettis pitched the 8th and Matt Belisle came out to pitch the 9th.

Belisle would strike out Ryan Howard for the third out in the 9th to end the game. The Rockies went on to win this game 12-1

Tulo was named player of the game which I found as B.S. because of when the runs and hit came but what are you going to do. I thought Morneau or Blackmon could of been it just as well because with out them getting hits and on base in the first we would not of had the 4-0 led when Tulo came up in the 2nd. How about 5 innings of no hit baseball for Chatwood does that not count for anything in this game he held the Phillies to 2 hits and 1 run in 7 innings of pitching. Which is incredible for a Rockies pitcher at Coors since it is such a hitters ballpark( sense the sarcasm)! He pitched a great game way to go Chatty great to see you back with great stuff!!!

That is it for this one I will be at Coors all week, remember to tip your waiters and waitresses!!!!!!

Today I attended the game with someone who I very rarely mention and is actually a very important person to make this all happen. It was my boss because of her awesome ability to juggle schedules and make it possible for me to attend as many of the Rockies home games as possible. So far I have not missed a home game; I have been in town for all year. So if you remember back in May I attended a game with most of the people including my boss to the game this game I brought just my boss, as she says “It is to kiss butt because I let him go on a month vacation”! So it was because she gave me the time to be able to hop in my truck and drive around the country watching baseball games. So this was my thank you to her for being so awesome!!!!! Thanks you for making this happen more than you  ever could imagine! You Rock!

So enough Butt kissing there was some baseball to write about.

Jeff Manship was the starting pitcher for the Rockies this was his second start for him this season. his first start was in NY against he Mets. This photo was a photo during the first inning which means I messed up first pitch which looked like this.

So he started the game with a single to Will Venable.

Venable diving back to first after his single lead-off single. The Rockies would get the next 2 batters out and then Yonder Alsonso hit a single and scored Venable. (1-0) Padres 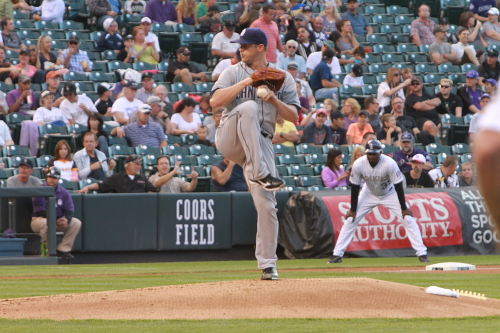 Dexter fowler got things going with a leadoff single, D.J. LeMahieu followed with a single and Troy Tulowitzki walked.

Wilin Rosario would get the first RBI for the Rockies, when he hit a single that scored Fowler and LeMahieu. The Rockies took a 2-1 lead. Nolan Arenado flew out to center field and Todd Helton hit a single, that single scored Tulo. 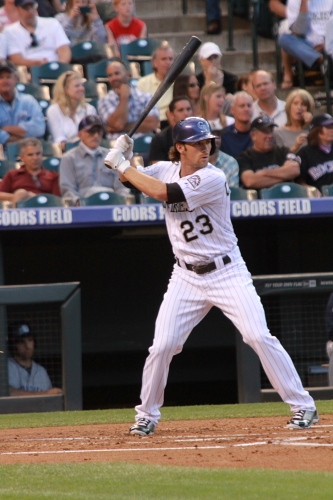 A Charlie Culbertson single would score Rosario Charlie Blackmon popped out to short and Manship the grounded out. The Rockies finished the inning with a 4 runs. (4-1) Rox

The Padres would once again take the lead in the second with 4 runs. Nick Hundley would hit a 2 run home run scoring himself and Jaff Decker who walked before Hundleys at bat. The next 2 were with some small ball Stultz got on base with a single and he scored on a Venable single scored Stultz and a Alexi Amarista single scored Venable for 4 runs in the inning. (5-4) Padres

If that was not enough the Padres Jedd Gyorko hit a solo home run to give the Rockies a 6-4 lead.

In the 3rd or 4th inning we headed to the upper deck to see one of her friends who were sitting up there and The boss wanted to test out here new super cool wide angle lens. 10 MM lens gets like the whole stadium in the photo from the upper deck. I got a few shots of the game from up there. 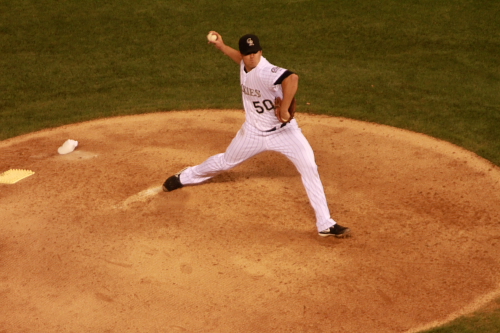 Manship pitching in the 4th inning.

Nolan Arenado started the 5th inning for the Rockies with a triple. He scored 2 batters later on a Charlie Culbertson sac-fly to left. (6-5) Padres

Adam Ottavino came in to pitch in the 6th inning. The Padres did score a 7th run in the sixth. (7-5) Padres. Jeff Manship left the game giving up 6 runs on 8 hits including the 2 home runs, walk 2 struck out none.

The Rockies went down in order in the 6th inning. Walt Weiss came out after Tulo struck out looking. Now that Tulo is getting a rep for arguing and did get thrown out on the road last week Weiss came out to protect him.

Neither team did anything in the 7th and the Rockies with 2 outs looked like they may get something going.

After the 2 Charlies grounded out Corey Dickerson would hit a triple off of the Padres Luke Gregerson.

After the hit the Padres would bring in ex- Rockies Huston Street. The inning would end and Dickerson did not score.

Dickerson on third with Street pitching after his 8th inning triple off Gregerson.

Wilton Lopez sat the Padres down in order in the 9th and the Rockies also went down in order against the Padres and they would win the game 7-5. It put an end to their 4 game winning streak but they are 4-1 on this home stand.

This was a pretty good game despite the loss. I would like to see the win since they have been playing well since that really bad road trip to the East coast and the not so good home stand against the Cubs, Marlins and Brewers.

Well that is it for this one. Have another to go from this series.

See You a Coors!