Coming directly from work I had sometime to kill before the gates opened at 4:30. I first headed down to the players entrance and not much was going on there. I than headed to the Rockpile entrance. It was about 45 minutes til the gate opened. After the gates opened I immediately ran up the steps and headed to the pavilions for BP. The Rockies were batting and not hitting much out. The Dodgers who usually have a good BP hit and about 6 baseballs were hit to the pavilions. So once again shut out on the day. I headed to the 1st base line and waited to dee who would sign and Jordan Pacheco and Tyler Colvin both signed did not get either to sign anything.

After warm up I stayed down the first baseline for first pitch. 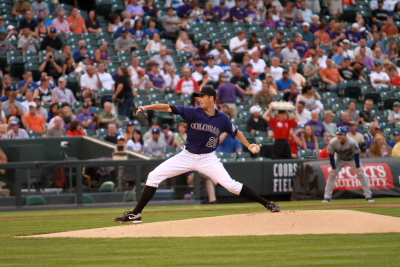 Jeff Francis was the Rockies starting pitcher. He pitched very well. He pitched 5 scoreless innings. Letting up 4 hits 1 walk and striking out 6. He got himself out of the 5th inning after getting into trouble in the with one out and a runners on 2nd and 3rd got out of the inning striking out the next 2 batters.Beckett and Victorino.

Shane Victorino was the first batter Francis faced and he grounded out to Jonny Herrera. He threw to first for the first out of the game. Francis did let up one hit in the first and that was to Matt Kemp who was stranded after hitting a 2 out double.

Josh Beckett made his first start for the Dodgers since being traded from the Red Sox along with Adrian Gonzalez, Nick Punto and Carl Crawford for James Loney and 3 other players from the Dodgers organization. His first pitch to Tyler Colvin was a strike.

His second pitch was not as succesful, Colvin hit a home run to the second deck in right. He would than get the next 3 Rockies out in order including striking out Carlos Gonzalez and Wilin Rosario. Francis and Beckett both pitched well in the second. Francis allowed a base runner in the 3rd by walking Shan Victorino. The Rockies would have a bunch of base runners in the 3rd. Jonny Herrera would get on base aswell as Francis, Colvin and Pacheco none would score Herrera and Francis would both get out at second. 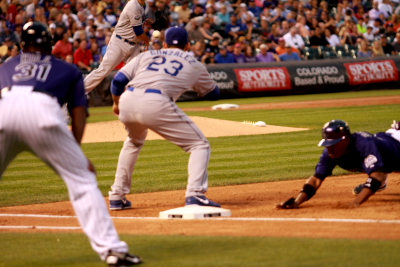 Herrera diving back to first while on base in the 3rd.

In the fourth inning I decided to head and visit some friends that were sitting down the third baseline. I did sit there the rest of the game. The Rockies did score a run after a Chris Nelson 2 out triple. He scored on a D.J. Lemahieu single. (2-0)The above photo is of  is Don Mattingly taking Beckett out in the 6th inning. Nelson would score for the Rockies once again in the 6th. (3-0) Rockies.

D.J Lemahieu turns a double play hit by Matt Kemp to get out off the 8th. 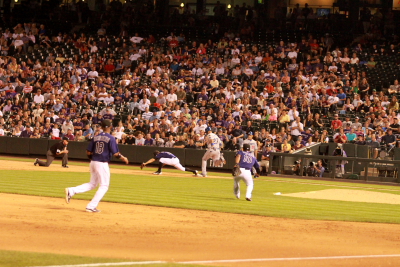 Pacheco making the stretch to get Kemp at first.

The Rockies had a HUGE 8th inning. Charlie Blackmon who came in for Andrew Brown in right, Led off the inning flying out to left. Chris Nelson than hit a double he once again scored on a Lemahieu single. Nelson scored 3 times this game.

Matt Belise would attempt to contribute offensively by bunting but that just resulted into a strike out for the second out of the inning. That would not stop the Rockies from scoring 7 runs in the inning. They sent 11 batters to the plate. Tyler Colvin hit a triple to clear the bases and Wilin Rosario hit a home run scoring Cargo and himself. Cargo got on base after striking out swinging on a wild pitch. 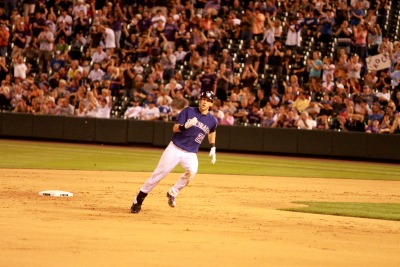 Colvin making the turn from second heading to third for his triple.

Here he is reaching third.

Wilin taking a stroll around the bases after his Home run in the 8th. (10-0) Rox 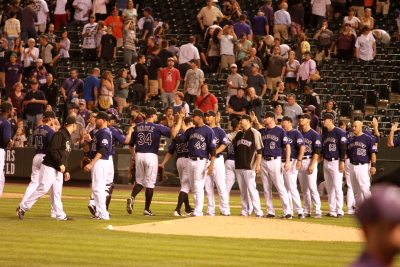 The Rockies celebrate a big night at the plate. The bats were alive and Pitching was solid it was a great combination to shut down the Dodgers powerful line up. The Rockie used 4 pitches Francis starting, Josh Roenicke, Rex Brothers pitch in the 7th and continued for an out in the 8th and Matt Belise would close out the game pitching the end of the 8th and the 9th.

Way To go Rockies, this may be to little to late,  but exciting baseball has returned to Coors. It is now being called Purple Magic by players. It has been a really good last few weeks for the Rockies at home and on the road. Hopefully this keeps going. They have 2 game remaining against the Dodgers this week.

That is it for this one.

See You At Coors!