This is my 34th MLB game of the year. 38th including the Minors. 2nd on road trip.

My 9th MLB stadium. Including the 2 old NY Stadiums and Cominsky Park. 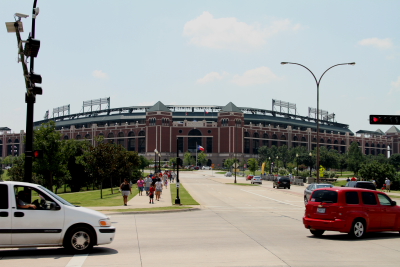 The stadium from down the block on Nolan Ryan Expressway. 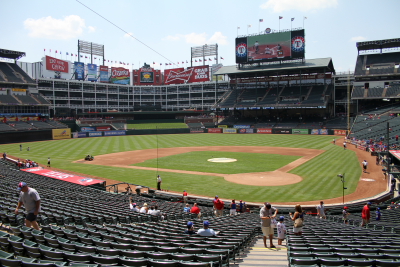 A view inside Rangers Ball Park. 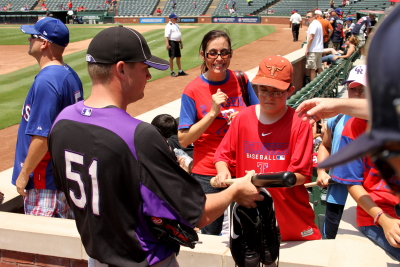 A few players were on the field warming up when we arrived. Matt Reynolds was the first to come over. 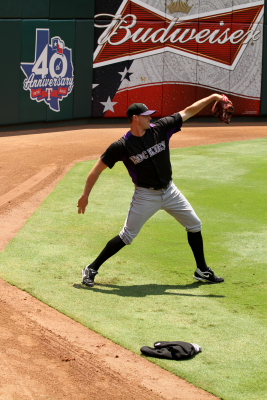 Matt Belise throwing in the outfield.

Alex White stopped by on his way out to the field and signed for us also. After throwing he came back oer and gave Amy a ball.

After hanging out by the wall I did a loop to check out the stadium. This is one of the places in centerfield called Ryans Express. There is a bunch of places out there to get food and beverages. There is also a few photos to sit at and watch the game on a large screen or with direct view of the field.

Here is a look at a Nolan Ryan Statue in center field in the background you can see part of the large video screen. 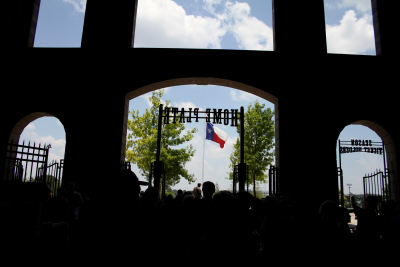 A look from the inside of the home plate entrance which is the entrance where we first entered the stadium.

Here is a look at the retired numbers and players for the Rangers Nolan Ryan, Johnny Oates and Jackie Robinson. I also found it interesting that Some guys named Albert-son, Dr. Pepper and Jose Cuervo was also retired in Arlington stadium!!!! Ok maybe not but found it funny that they had these sponsors in the same section as the retire numbers.

While I was walking around Rafael Betancourt signed on the third base line. 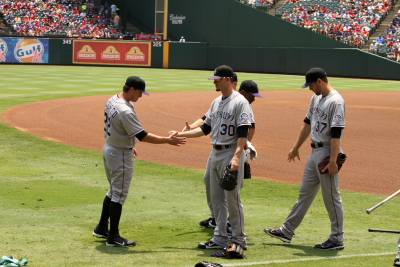 The bull pen staff heading to the bullpen for the start of the game.

Colby Lewis throws the first pitch to the Rockies Jonny Herrera. Jonny would hit a single steal 2nd and 3rd. He would than score on a Jason Giambi single. Lewis did strike out 3 Rockies in the inning.

Carlos Gonzales fouls one-off during his at bat in the 1st. inning. He was one of the strike outs for Lewis in the inning.

Giambis hit looked like it may have been caught.

Michael Cuddyer at the plate in the first he was the third strike out of the inning.

Josh Hamilton loses his bat in the 1st.

During the 2nd inning we met up with Chris from Rock Nation. If you have not checked out the rock Nation Website do it after you read this post!!

Here are Chris with Amy and I

The Rockies scored 3 runs in the 3rd while we were hangin out on the concourse.

After we met up with Chris we headed to wander the stadium we really did not get far. We stopped and saw the rest of the game from above the Rockies bullpen.

Josh Hamilton catches a Tyler Colvin hit to center. He moved over to center when Gentry left the game.

Here is a look of some of the bullpen members trying to keep cool in the shade. 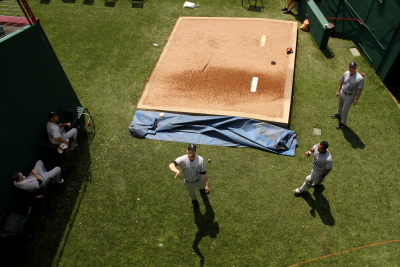 Adam Ottavino kept his promise and tossed it to her!!

Here she is with it. This was Wil Nieves first HR with the Rockies. 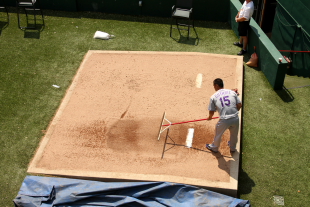 I think Jeremy Guthrie is embracing his new role in the bullpen. i think he has a future in field maintenance if thing don’t pan out there. I hope he does not have to make the switch. He did real well in his first appearance in the bullpen the other night in Philly.

Josh Outman pitched into the 5th inning. This is his 78th pitch. what happened to the 75 pitch limit? He did pitch well but it got a little out of control in the 5th. the Rangers score 6 in the inning. including Nelson Cruz’s 2nd HR of the day off Ottavino.

Dex Making a catch in the 5th. I think it was hit by Ian Kinsler.

Ottavino while he was warming up in the 5th inning.

Here he is heading in from the bullpen. 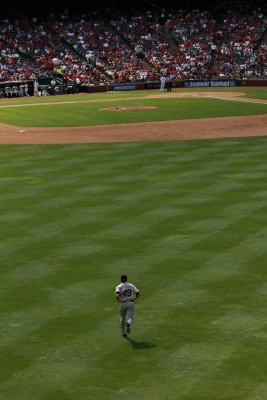 Rex Brothers heading into the game between innings.

So the Rangers have a race with these 3 dots. Like our random dental products race. 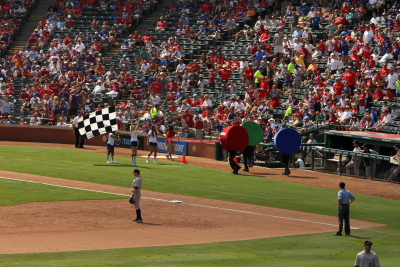 Michael Young slide into second after his lead off double in the 7th.

Rockies celebrates their 11-7 victory over the Rangers. This series is now tied at one game apiece.

Can’t wait for the third and final game from Arlington. This is a really cool stadium. 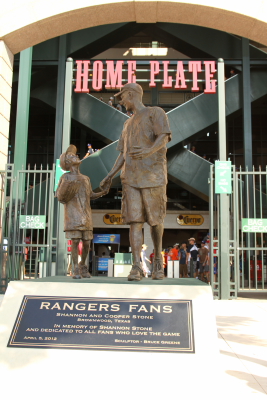 this is the statue at the front of the home plate entrance. In Memory of the Rangers fan who passed away after a fall in the stadium last year. Shannon Stone and his son Cooper and All Fans Who Love the Game. 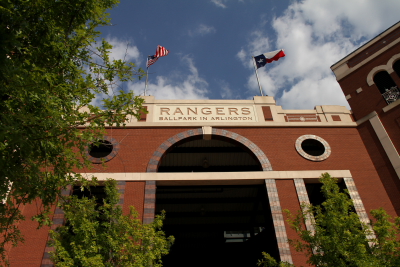 Another look at the front of the stadium.

Now this is a look of the Cowboys Stadium. This building is crazy looking. It is HHUUGGEE!!!! I think it has its own weather pattern!