Starting Pitchers for this game were

Jason Hammel For the Rockies and Ted Lily for The Dodgers

Like always I got to the game early for BP for this game they gave out Rockies Cooler Bags Sponsored by Coors Light. So after I entered I headed out to the pavillions like always. I got 3 Bp balls, the 1st from the Rockies that landed 2 rows behind me, so I hopped the 2 rows and got it. The 2nd was hit high and 2 sections to my left so I scurried over and got the ball as it rolled down the section. The third landed jus short of me and i hooped the row again and got that one. It was hit By Juan Uribe. These balls were #17, 18 & 19 of the year at Coors. Not to forget the 10 I have also got in the Springs(Not Counted towards my MLB avg). Which is about .80 balls caught per game attended. .8260869565217391 per game!!! 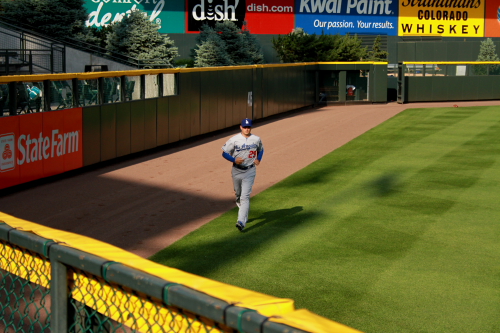 As Zach and I were talking Dodgers starter Ted Lilly was getting a little running in.

I then headed over to the first place line. Here are a few photo along the way. 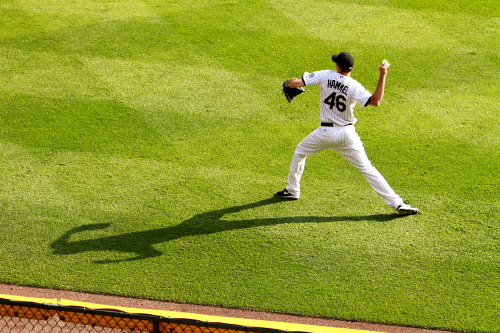 Jason Hammel getting a couple of long tosses in before heading to the bullpen.

Jason Hammel and Chris Iannetta Heading into the bullpen. 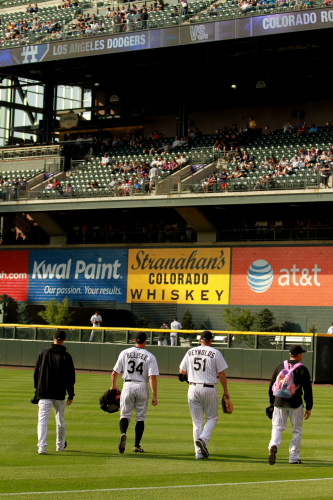 The Bullpen staff as always heading out with the Rookie carrying the pink backpack. I think his is a Disney Princess backpack. The Rookie is Rex Brothers.

Jason Hammel and Chris Iannetta Heading in from warming up in the bullpen.

The Rockies taking the field fro the game.

Eric Young Jr. Fielding a Andre Ethier single in the first. Beside this single the lead off batter Dee Gordon grounded out for the first out Jamie Carroll lined out to Chris Nelson and then this single by Ethier. Matt Kemp would then ground out. The Rockie half of the inning was almost the same. Cargo Grounded out, Young grounded out and Giambi hit a single before The Deuce poped out to third.

The Deuce looking at a pitch during his at bat in the 1st. 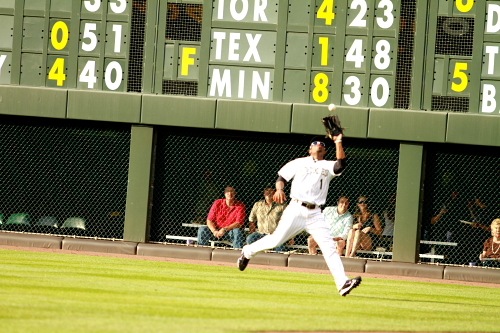 Ty Wiggington rounding 2nd after hitting his HR in the 2nd. This was the 10,000 photo I have taken with this camera since I got it in March. 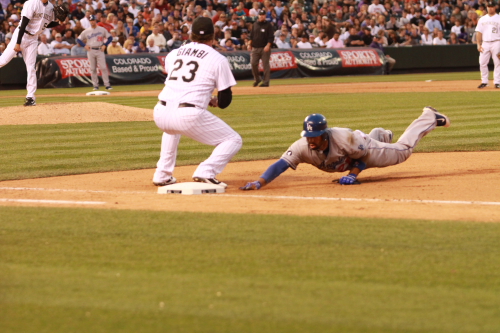 Matt Kemp diving back to 1st in the 3rd inning after he hit a single. I believe Hammel threw to first 4 times during James Loney’s at bat.

Don Mattingly goes to the mound Lily got into trouble in the 6th inning. Charlie Blackmon hit off a single  to lead of the inning. Iannetta would then walk Jonny Herrera would pinch hit for the pitcher spot. cargo then walked. The Dodgers brought in Blake Hawksworth who got them out of the inning. Herrera pinched hit for Matt Reynolds who was brought in after Jason Hammel left in the 6th with tightness in his lower back.

The rockies would make a game of it in the 8th Cargo lead off with a double young hit a single, Giambi would walk to load up the bases for the Deuce who also hit a single scoring Cargo and Eric Young Jr. 7-3 Dodgers. A Wiggington would then fly out to center and Seth Smith hit a 1 run pinch hit triple to score Giambi and The Deuce. 7-5 Dodgers. Blackman then hit a single scoring Smith and the Rockies would Come within 1 run of the Dodgers 7-6 at the end of the inning. 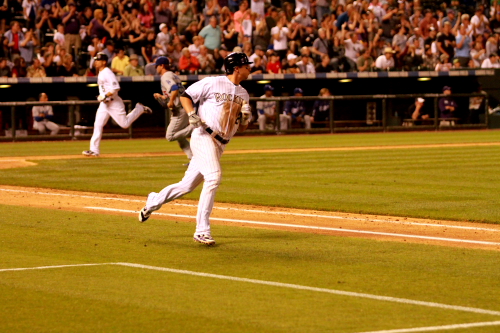 The Deuce Running to first after hitting his single in the 8th, that scored Cargo and EYJ.

The Dodgers responded in a big way in the bottom of the 9th scoring 4 more runs making the score 11-6. Once again proving that fundemental baseball works for scoring runs. This latly has been a important thing that the Rockies have been having trouble with this last few weeks. When they do play for the hit instead of the long ball the Rockies score runs when they fall behind and start over swinging they become very unproductive.

The Rockies Would Score a single run in the 9th with 2 outs. After Cargo lead off with a double he was called out after Eric Young Jr. hit a very hard ball back to the Dodgers pitcher and Cargo was doubled up after running off 1st. If it got past the pitcher he most likely would of scored. Giambi would then hit a single and would score on Wiggington 1b. Nelson would then walk and Blackman would hit a fly to Tony Gwynn Jr. that he made a fantastic catch for the final out.

The Rockies  finished this four game series sunday afternoon See You There!!!!

Once again thanks to the undisclosed person who lets me sit down low to get some of these photo’s.